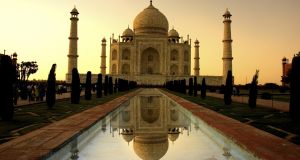 The Taj Mahal may be one of the world’s Seven Wonders, but it gets no mention in a new government-issued tourism brochure for the northern Uttar Pradesh state, where it is situated.

The brochure was released to mark the first six months in office of the provincial government of the Bharatiya Janata Party (BJP). One page is dedicated to the Gorakhnath temple, 170 miles (270km) north of the state capital, Lucknow, of which state chief minister, Yogi Adityanath, is head priest.

The exclusion from the booklet of the 17th-century Taj Mahal in Agra, built by the Mughal emperor Shah Jehan as a mausoleum to his wife, follows Adityanath’s public assertion in June that the gleaming white marble monument in no way represented Indian culture.

At the time Adityanath, a hardline Hindu revivalist, declared that only ancient Hindu scriptures such as the Ramayana and the Bhagavad Gita, with 700 verses in Sanskrit, constituted Indian civilisation.

Opposition members said that by omitting the Taj in the tourist brochure, the state government was “wilfully discriminating” against more than 200 million Muslims, who comprise about 18 per cent of India’s population of about 1.3 billion.

“The exclusion of the Taj Mahal exposes the mindset of the BJP government” said Rajendra Chaudhary of the state Socialist or Samajwadi Party, which was ousted from power by the BJP in provincial elections in March.

“The monument has no connection with any community and must be preserved and valued as a national treasure,” he added.

State officials, however, said the Taj was neither being neglected nor marginalised. “There has been some miscommunication which has undermined the Taj,” said state minister Siddharth Nath Singh.

In appreciation of the Taj’s grandness, he added, the government was considering building an international airport at Agra for people wanting to visit the monument.

Ever since the BJP seized federal power in May 2014 and in several provinces across India thereafter, it has played down centuries of India’s Muslim past.

The district court at Agra, for instance, has been hearing arguments in a case filed by six Hindu lawyers that the Taj Mahal was in reality a Hindu temple and had no Muslim links, a claim that has been robustly refuted by the Archeological Survey of India and prominent historians.

The petitioners claimed that the Taj’s original name was Tejo Mahalaya and requested the court that Hindus be permitted to perform puja, or prayers, inside the monument.