Mueller investigation: what we know, and what we don’t

Questions remain about WikiLeaks, Russian social media and what role did the White House have in Cohen’s false testimony? 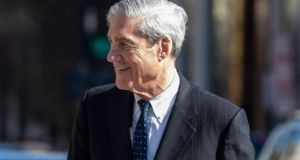 Robert Mueller. He has delivered his report on alleged Russian meddling in the 2016 US presidential election to attorney general William Barr. Photograph: Tasos Katopodis/Getty Images

Over the past 22 months Robert Mueller has revealed a significant amount of detail about Russia’s role in the 2016 US presidential election and the activities of people linked to Donald Trump’s campaign. Here is a rundown of what we have learnt, and some of the questions that remain.

The special counsel alleged the agents were behind the online personas that published the hacked documents and also passed portions of the emails to WikiLeaks. Operating behind their personas, the hackers discussed with WikiLeaks how to maximise the impact of the documents, according to the indictment.

None of the agents have responded to the charges.

Their indictment included a tantalising detail: the first time the hackers targeted Clinton’s personal office was the day that Mr Trump, at a press conference, asked Russia to hack her emails. “Russia, if you’re listening, I hope you’re able to find the 30,000 emails that are missing,” he said.

Associates of Trump were keenly interested in obtaining dirt on Clinton, but there is not yet a full picture of the extent and timing of any links to WikiLeaks.

Roger Stone, a longtime political operative and self-described “dirty trickster” who was an adviser and friend to Trump, was indicted for lying to Congress on the subject.

In the indictment Stone was said to have told “senior Trump campaign officials” that WikiLeaks had damaging information on Clinton in around “June and July” 2016 – the earlier date being ahead of WikiLeaks’ first document dump in July that year.

After WikiLeaks released the first set of information, a senior Trump campaign official was directed – Mueller has not said by who – to contact Stone about any future releases by WikiLeaks founder Julian Assange, according to the indictment.

When a congressional committee investigated the issue, Stone allegedly told law-makers that the source of his information was Randy Credico, a New York radio host, when it was actually Jerome Corsi, a conservative author and conspiracy theorist.

Stone has pleaded not guilty. Corsi said last year he was offered a plea deal by Mueller for alleged false statements. He rejected the offer, and has denied any wrongdoing. He was not charged by the special counsel’s office.

Corsi would tell Stone in August: “Word is friend in embassy [Assange] plans 2 more dumps. One shortly after I’m back. 2nd in Oct. Impact planned to be very damaging.”

And in October, Stone told Steve Bannon, the chairman of the Trump campaign, that WikiLeaks would release “a load every week going forward”, shortly before Assange published emails belonging to John Podesta, Clinton’s campaign chairman.

What did WikiLeaks know about the identity of the hackers?

Was the timing of the attack on Clinton’s personal office coincidence or something darker?

Who ordered the outreach to Stone?

Where did Corsi get his information about WikiLeaks from?

Mueller indicted 13 Russians – including Yevgeny Prigozhin, a businessman known as “Putin’s chef” – and three organisations, including the Internet Research Agency, a Russian troll agency, for running an online propaganda campaign in the lead up to and during the 2016 election.

None of the individuals have responded to the case in court, but one corporate entity has challenged the prosecution through US lawyers.

The defendants allegedly created false US online personas, Facebook pages and Twitter profiles, seizing on highly emotive and controversial cultural and political topics “to sow discord”. The overall aim was to support Trump and disparage Clinton, but they played both sides, according to the indictment.

When the case was announced, Rod Rosenstein, the outgoing deputy attorney-general who has overseen the Mueller inquiry, emphasised the charges did not accuse any American of knowingly aiding the propaganda effort.

Mueller’s investigation highlighted contacts between Trump aides and Russians. The most famous of the contacts between the Trump campaign and Russian individuals is a meeting in Trump Tower in New York in June 2016, when Donald Trump Jr, Jared Kushner and Paul Manafort met a Russian lawyer promising dirt on Clinton.

That meeting was revealed in press reports, and Mueller did not bring any charges in connection with it. However, Mueller’s work described other contacts.

Manafort, a lobbyist who was for a time Trump’s campaign manager, was prosecuted by Mueller for crimes unrelated to the 2016 campaign but the actions brought out intriguing new details. The special counsel accused Manafort of lying in interviews about his contacts with Konstantin Kilimnik, a business associate who the US has accused of having active ties with Russian intelligence.

The contacts appear to have included discussions about a peace plan between Ukraine and Russia during the 2016 campaign, and the apparent sharing of polling data on the presidential race, though the full story has been obscured in heavily redacted court filings.

Kilimnik was indicted for attempted witness tampering in Manafort’s case. Believed to be in Russia, he denies any wrongdoing or connection to Russian intelligence.

Michael Flynn, a former national security adviser to Trump, was the first person publicly indicted by Mueller, charged with lying to the FBI about his contacts with the Russian ambassador during the transition after Trump won the 2016 election but before he was inaugurated.

He lied about asking the ambassador to avoid retaliation for sanctions President Barack Obama had imposed on Russia because of its meddling in the election. The ambassador told him that Russia decided not to impose its own sanctions on the US as a result of Flynn’s request.

And then there was George Papadopoulos, a Trump campaign foreign policy adviser who lied to the FBI about his attempts to build contacts with Russian officials and his interactions with Joseph Mifsud, a London-based professor who told him the Russians had “dirt” on Clinton in the form of “thousands of emails”.

Papadopoulos joined the Trump campaign in March 2016, and understood his role to be laying the groundwork for better US-Russia relations, which was a goal Trump frequently highlighted as a candidate.

He attempted to use Mifsud’s Russia connections to arrange a meeting between the Trump campaign and Russian government officials, keeping Trump representatives abreast of his progress.

His activities sparked the FBI’s counter-intelligence investigation into Russia’s role in the 2016 campaign. He pleaded guilty to lying to the FBI and co-operated with the special counsel, though Mueller said his co-operation was not extensive or particularly useful. He spent 12 days in prison.

Flynn has co-operated extensively with Mueller. What has he told the special counsel?

Was Kilimnik merely a player in Manafort’s personal business dealings, or did he have a role in a wider Russian effort to interfere with the 2016 election?

Does Papadopoulos’ case hold a broader significance, or was he merely a bit player?

What became of Mifsud?

The Trump Organisation had long flirted with an idea of building a Trump Tower in Moscow. But was the company pursuing the idea even while Trump was running for office, something that might have influenced his foreign policy views with regard to Russia?

Michael Cohen, Mr Trump’s longtime lawyer and fixer, pleaded guilty to lying to Congress about his efforts to strike a deal in Moscow when Trump was a candidate for president in 2016.

The special counsel’s office said Cohen lied to “minimise links” between the project and Trump. “In the hopes of limiting the ongoing Russia investigations”, he gave the “false impression” that the project ended before the first Republican primary that year, according to court filings.

But rather than discussions for the project ending in January 2016, Cohen discussed getting Russian government approval for the tower as late as June with Felix Sater, a convicted felon and former associate of Trump. Cohen discussed the tower with Trump more than three times, he claimed to Congress, and “briefed [Trump] family members”.

He also tried to arrange for Trump to travel to Russia to secure the deal following the Republican convention in Cleveland, and told Sater: “My trip before Cleveland. Trump once he becomes the nominee after the convention.”

Cohen had told Congress he contacted the office of Putin’s spokesperson, Dmitry Peskov, but got no response. In fact, he spoke to an assistant in the office and requested help with the tower project. The day after the call Sater told Cohen: “It’s about [Putin] they called today.”

What role if any did Trump or the White House have in Cohen’s false testimony?

How did the Russian government view Cohen’s and Sater’s efforts?