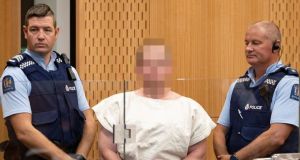 Forty-nine people were killed and more than 40 others were injured after one gunman opened fire at two mosques in Christchurch in New Zealand on Friday.

Brenton Harrison Tarrant (28) has been charged with murder and appeared in Christchurch District Court on Saturday morning (New Zealand time).

New Zealand police said on Twitter that while the man was only facing one charge, further charges would be brought.

Tarrant left a 74-page manifesto that he posted on social media identifying himself as a 28-year-old Australian and white nationalist who was out to avenge attacks in Europe by Muslims.

The gunman live-streamed the attack on Facebook as he shot victims at the Al-Noor mosque.

Police have urged the public not to share the “extremely distressing” material online.

New Zealand prime minister Jacinda Ardern said it was one of the country’s darkest days and condemned what she called “an extraordinary and unprecedented act of violence”.

She told a press conference on Saturday morning in New Zealand that the suspected killer had five firearms.

She said there were two semi-automatic weapons, two shotguns and a lever-action firearm.

He had obtained a gun licence in November 2017.

Ms Ardern said the suspect had a Category A gun licence which enabled him to legally obtain semi-automatic weapons.

When asked by a reporter whether semi-automatic weapons should be banned, she said that it was one issue which should be examined.

Mohan Ibrahim escaped the New Zealand mosque attack by climbing out of a window.

49 people have been killed in two mosques in Christchurch.https://t.co/dS05Z9LNaC pic.twitter.com/bRfszHbKPj

“Now is the time for change.”

Ms Ardern added that three people had been arrested over the attack, including an Australian who has been charged with murder.

She said: “This individual has travelled around the world with sporadic periods of time spent in New Zealand.

“They were not a resident of Christchurch, in fact they were currently based in Dunedin at the time of this event.

“Inquiries are ongoing to establish whether the other two who were arrested were directly involved with this incident.

“The fourth person who was arrested yesterday was a member of the public who was in possession of a firearm, but with the intention of assisting police.

“They have since been released.”

Police commissioner Mike Bush confirmed on Twitter that the death toll stood at 49, with 42 injured. Two of those injured are in a critical condition, including a four-year-old who is being transported from Christchurch to the country’s specialist children’s hospital Starship in Auckland.

He added: “There is no guarantee the risk is limited to Canterbury and we need all New Zealanders to be extra vigilant.

“Police is aware there are distressing materials related to this event circulating widely online. We would urge anyone who has been affected by seeing these materials to seek appropriate support.”

He said there would be a heightened police presence at community events on Saturday “for safety and reassurance”.

The online footage, which appears to have been captured on a camera strapped to the gunman’s head, showed the gunman driving as music played in his vehicle. After parking, he took two guns and walked a short distance to the entrance of the mosque.

He then opened fire. Over the course of five minutes, he repeatedly shoots worshippers, leaving well over a dozen bodies in one room. He returned to the car during that period to change guns, and went back to the mosque to shoot anyone showing signs of life.

The video shows the gunman driving off at high speed and later firing at parked cars and a building. Police said the second mosque attacked was in the suburb of Linwood, but gave no details.

Multiple fatalities had occurred at the two mosques, but police said it was unclear how many attackers were involved.

One man who said he was at the Al-Noor mosque told media the gunman was white, blonde and wearing a helmet and a bulletproof vest. The man burst into the mosque as worshippers were kneeling for prayers.

“He had a big gun . . . he came and started shooting everyone in the mosque, everywhere,” said the man, Ahmad Al-Mahmoud. He said he and others escaped by breaking through a glass door.

Radio New Zealand quoted a witness inside the mosque saying he heard shots fired and at least four people were lying on the ground and “there was blood everywhere”.

Responding to the attack on Friday, the UN secretary general, Antonio Guterres, warned there was an urgent need to tackle Islamophobia across the world, his spokesman said.

While there was no reason to believe there were any more suspects, the prime minister on Friday said the national threat level was raised from low to high.

Police warned Muslims against going to a mosque anywhere in the country, and Air New Zealand cancelled several flights in and out of Christchurch, saying it could not properly screen customers and baggage.

Police said the investigation extended 240 miles to the south, where homes in Dunedin were evacuated around a “location of interest”.

All mosques in New Zealand had been asked to shut their doors, police said.

Another unconfirmed video taken by someone else appeared to show police seizing the gunman by the side of a road.

Ms Ardern said on Saturday: “Many of you may have seen the footage of the arrest and I can only describe it as an act of bravery on behalf of all New Zealanders and an act that showed very little regard for their own personal safety.”

Violent crime is rare in New Zealand and police do not usually carry guns. Before Friday, New Zealand’s worst mass shooting was in 1990 when a man killed 11 men, women and children in a 24-hour rampage in the tiny seaside village of Aramoana. He was killed by police. – Agencies