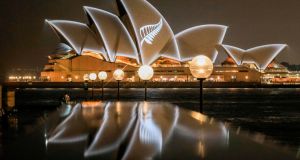 Family members of an Australian man who allegedly murdered 50 people in two New Zealand mosques on Friday have expressed their sorrow for what they called “unrepairable” actions.

Brenton Tarrant, from the New South Wales town of Grafton, has been charged with one count of murder and is in custody in Christchurch. In a brief court appearance on Saturday, he flashed a neo-Nazi hand signal while on camera.

His grandmother, Marie Fitzgerald (81), told Channel Nine television station that Tarrant was “an ordinary chap”, but that his alleged crimes showed he had “changed completely” from “the boy we knew”.

Tarrant’s uncle Terry Fitzgerald said his thoughts were with the victims. “We are so sorry for the families over there, for the dead and injured.”

Australia’s prime minister Scott Morrison and opposition Labor Party leader Bill Shorten have called on social media companies such as Facebook to do more to prevent violent content after a live stream of the Christchurch attack went viral.

“We wouldn’t allow television or print media to put some of the filth and rubbish and violence and perversion that gets put out on social media, so we can’t just have one standard for old technology and give a leave pass to new technology,” Mr Shorten said.

Six Australian identification specialists have flown to Christchurch to help with the postmortem process, and Australian volunteers have also arrived to help with Muslim burial rituals, such as the washing of the body.

“The [alleged gunman] was an Australian himself, so as Australians we feel like we should do whatever we can do to help,” said 21-year-old Ali Armando, who flew from Brisbane to take part.

Islamic tradition dictates that people are buried soon after death, but the identification of all of the victims is expected to take until Wednesday.

Controversial British right-wing commentator Milo Yiannopoulos has been banned from entering Australia after he responded to the Christchurch shootings by describing Islam as a “barbaric” and “alien” religious culture.

Three weeks ago Mr Yiannopoulos was banned from entering Australia for a speaking tour planned for later this year, but this was overturned after the intervention of some government MPs from the Liberal Party and conservative media outlets. The ban was reinstated after his comments on the massacre in New Zealand.

Almost a million people have signed an online petition calling for a Queensland senator, Fraser Anning, to be removed from parliament. On Friday, Mr Anning said: “The real cause of bloodshed on New Zealand streets today is the immigration programme that allowed Muslim fanatics to migrate to New Zealand in the first place.”

He added: “Today’s shootings in Christchurch highlight the growing fears within our community in both Australia and New Zealand over the increasing Muslim presence.”

A silver fern, which is a New Zealand national symbol, was projected onto the sails of Sydney Opera House on Saturday as a mark of respect and solidarity.