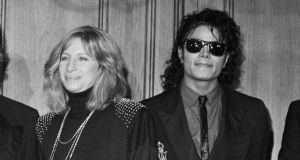 Barbra Streisand has apologised over her remarks about Michael Jackson and two men who have accused him of sexual abuse, saying she should have chosen her words more carefully and that she admires the accusers for “speaking their truth”.

Streisand had been strongly criticised for her comments about two men who accused Jackson of sexual abuse in the HBO documentary Leaving Neverland.

Speaking to the Times in advance of performances in Britain this summer, Streisand said she “absolutely” believed Wade Robson and James Safechuck.

But she said: “You can say ‘molested’, but those children, as you heard say, they were thrilled to be [at Jackson’s Neverland ranch]. They both married and they both have children, so it didn’t kill them.”

In the documentary, the two men allege Jackson began grooming them when they were as young as seven and subjected them to sexual abuse. Both men say that as adults they have suffered from depression, self-loathing and anxiety and have struggled with familial relations.

Streisand (76) said she had “a combination of feelings. I feel bad for the children. I feel bad for him. I blame, I guess, the parents, who would allow their children to sleep with him.”

It is widely believed Jackson was verbally and physically abused as a child.

“His sexual needs were his sexual needs,” said Streisand, “coming from whatever childhood he has or whatever DNA he has.” When she met him, she said, she found him “very sweet, very childlike”.

The director of Leaving Neverland, Dan Reed, responded on Twitter, asking: “Did you really say that?” On Saturday morning, he added: “’His sexual needs were his sexual needs’ - is pedophilia tolerated in parts of the entertainment industry?”

Streisand subsequently posted an apology online. “I am profoundly sorry for any pain or misunderstanding I caused by not choosing my words more carefully about Michael Jackson and his victims,” she wrote.

“I didn’t mean to dismiss the trauma these boys experienced in any way – Like all survivors of sexual assault, they will have to carry this for the rest of their lives. I feel deep remorse and I hope that James and Wade know that I truly respect and admire them for speaking their truth.”

Leaving Neverland has prompted a partial scrubbing from pop culture of Jackson’s legacy. The Simpsons pulled an episode he voiced, and Jackson-inspired pieces were removed from a Louis Vuitton collection.

Jackson’s estate has called Leaving Neverland “an outrageous and pathetic attempt to exploit and cash in on Michael Jackson” and has vowed to defend Jackson’s name. – Guardian