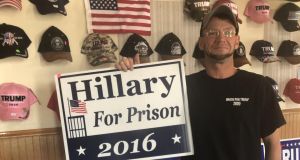 As you drive into the small town of Owatonna in southern Minnesota, a flurry of pro-Trump signs and flags comes into view.

Close to the Salvation Army shop, the Trump Store is located on Cedar Avenue in the south of this country town.

The shop offers an array of Trump-related products and paraphernalia – including the prolific blue Trump-Pence 2020 yard-signs that line the roads of this midwest community and a vintage “Hillary for Prison 2016” sign from the last election campaign.

Originally from Indiana, owner Steve Adams has spent much of the past few years selling merchandise at rallies given by the US president, but recently opened a store as the number of campaign events reduced due to the Covid-19 pandemic. He chose southern Minnesota. “Minnesota needs Trump,” he says. “There’s a lot of Trump support here. I go by what I hear from people, not the media. I think he can do it.”

Owatonna is the largest town in Steele County, a rural district in the south of the state. Across the street from the Trump Store is the county fairground, usually the centre of a bustling state fair, but closed since the coronavirus hit. The annual fair, which stretches back to 1860, reflects the community’s rural roots.

On the outskirts of Owatonna, corn fields stretch as far as the eye can see, and grain silos pepper the landscape. The area is predominantly white – over 95 per cent of Steele County was white according to the last census. The county voted by 59 per cent for Donald Trump in 2016.

It is in rural counties like these that the president sees a path to victory on November 3rd.

Trump lost Minnesota to Hillary Clinton in 2016, but only just. The margin of victory was 1.5 per cent, or 44,000 votes. “We came this close from winning this,” Trump said during a campaign event in Minnesota in 2018, and has regularly told advisers that if he had just held one more campaign event in 2016 he believes he could have won the state.

Trump is likely to pick up support in the rural areas in the south of the state and the old Iron range in the north near the Canadian border, once a reliable Democratic area.

Speaking ahead of the president’s visit to the region on Friday, the former mayor of Duluth Gary Doty explained why six former Democratic mayors in the region had recently endorsed the Republican nominee. “This is something I never thought I would see happen. But it’s happening for a reason. It would be devastating for us to have a president Biden who doesn’t support the mining industry,” he says. It would “bring north eastern Minnesota to its knees”.

But in urban areas of the state it’s a very different story.

One hundred kilometres directly north of Owatonna is Minneapolis. Located across the Mississippi River from Saint Paul, the Twin City area is heavily Democratic. Minneapolis gained national and international attention this year when 46-year-old African American George Floyd was killed on the southside of the city when a white police officer kneeled on his neck for several minutes as his colleagues looked on.

Almost four months later, the street corner where Floyd lost his life has become a shrine to the man who has already entered the pantheon of black Americans whose death became a wake-up call to America about race.

Like Emmet Till, the 14-year-old boy who was brutally murdered in 1955, and Martin Luther King jnr who was assassinated in 1968, George Floyd has become a symbol of America’s continuing fight for racial equality.

Today, flowers and signs cover the area where Floyd was pinned down by police officers. At the centre is a sculpture of a raised fist, surrounded by flowers and a picture of Floyd. Wall murals and pavement art mark the site where he lost his life.

Cynthia Fitzgerald is walking among the flowers, reading the messages and signs that decorate the area. “I come here a lot,” says the 18-year-old. “What they did to him, it could have been anybody. Did you see the video?” she asks me. Born and raised a few blocks away, she said the riots that followed the death of Floyd were frightening at times.

“A lot of those folks were outsiders. They weren’t from around here. That looting, it was white people too,” she says, as she points to the boarded-up buildings.

Those riots, and the nightly unrest that swept across the country, have hung over Minneapolis since the death of Floyd. The city, which was already suffering as coronavirus shut down broad areas of the economy, has struggled to heal in the wake of the Floyd murder.

The Third Precinct police station, which was where the police officers who arrested George Floyd that fateful day were assigned, was burned to the ground in the days following the Floyd killing. A plan to relocate the station to a new site fell through earlier this month after protests took place outside the new building and the landlord’s home.

Calls to defund the police have raised hopes among Republicans that they can win support in suburban areas of the greater Twin Cities area.

Minneapolis has long grappled with issues of police reform and racial justice. Like many American cities it has a troubled history of segregation in housing and education. But it has also become increasingly diverse in recent years.

Ilhan Omar, one of the so-called “squad” of progressive women elected  to Congress in the 2018 elections, represents the greater Minneapolis district in Washington, and is one of the many Somalis who have made the city their home, after fleeing war.

Minnesota really is the great exemplar of divided America

Throughout the summer, Trump has seized on the unrest and violence that occurred alongside the peaceful protests in Minneapolis, casting himself as the candidate of law and order.

The big question is how that will play on November 3rd. Polls throughout the summer have shown that support for the Black Lives Matter movement has gradually declined in Minnesota and nationwide. A report for Pew Research this month showed that support was at 67 per cent in June, but now stands at 55 per cent. while this is a positive trend for Trump, it is significant that a majority of Americans still support the movement.

Further, an ABC-Washington Post poll in Minnesota last week found that Democratic candidate Joe Biden leads Trump by 11 points when voters were asked which candidate they trust to handle crime and safety. This suggests that Trump’s strategy may not be working in the state that was the epicentre of this summer’s unrest.

Nonetheless, both campaigns are investing heavily in Minnesota. Both Trump and Biden held campaign events in the state on Friday.

Democrats are on the defensive. While the state has not voted for a Republican presidential candidate since Richard Nixon in 1972, there are concerns that a once-reliably blue state could follow the trend of other midwestern states such as Wisconsin and Michigan, which switched from Democrat to Republican in 2016.

David Schultz, a professor of political science at Hamline University in Saint Paul, argues that there have been signs for some time that Minnesota is moving in the direction of other midwestern states.

“Even before 2016 Minnesota was starting to demonstrate many of the characteristics that were evident in other presidential swing states. For example, a high percentage of Minnesota’s population is white working class without a college degree. Those voters went overwhelmingly for Trump in 2016,” he says.

The state also encapsulates the demographic and social divides that are increasingly driving political polarisation in the United States. “Minnesota really is the great exemplar of divided America,” says Schultz.

“We’re the only state in the country where our state legislature is divided. Our Senate is Republican, our House is Democrat. We’ve rural areas of the state that are very Republican, and we’ve inner ring suburbs that are Democrats,” he says.