‘The working class...are suffering the consequences of the regional government’s poor handling of all this’

Protesters called local lockdowns in less affluent areas of Madrid discriminatory and called on the government to provide better healthcare to people living in the districts. Video: Reuters 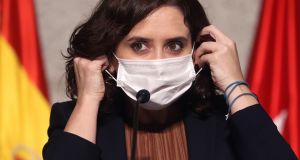 People in the queue to be tested for Covid-19 at the Buenos Aires health centre in south Madrid on Friday morning were met with a bleak but polite homemade sign.

It still bore the previous day’s information, spelled out in marker pen: consultations – by phone and in person – 483; Covid consultations, 19; PCR tests, 78; and number of staff absent, 13.

Clipped beneath was another note: “We’re doing all we can to look after you. Sorry for the disruption.”

The board’s plaintive message is echoing across many of the poorest parts of the Madrid region as a second wave of coronavirus batters Spain, and once again threatens to overwhelm the health system in and around the capital.

During the past two weeks Spain has reported more than 122,000 new Covid-19 cases, more than a third of them in the Madrid region. The number of cases per 100,000 people stands at 259.76 across Spain as a whole. In Madrid the figure rises to 659.41, and in Puente de Vallecas, the district served by the Buenos Aires medical centre, it is 1,241.

As the numbers surge in Spain, bringing with them a sickening sense of deja vu, Madrid’s regional government has floundered.

Last Wednesday the deputy health minister said targeted lockdowns would be introduced this weekend to arrest the spread of the virus. A day later, as the central government called for urgent measures, the administration backtracked, saying the word “lockdown” made people nervous and adding that the plan was merely to “reduce mobility and contacts” in the most affected areas.

The regional president, Isabel Díaz Ayuso, who questioned the wisdom of extending the stringent national lockdown back in May – “people get run over every day but that doesn’t mean we ban cars” – accused the central government of abandoning Madrid.

She was criticised earlier this week after claiming that the infection rate in the south of the city and the region was due “among other things, to the way of life of immigrants in Madrid and the population density in these districts and municipalities”.

Late on Friday afternoon Ayuso announced that a partial lockdown of the 37 worst-hit areas in the region would come into effect on Monday. The restrictions will apply to areas – including districts of Puente de Vallecas – where there are more than 1,000 cases per 100,00 people.

The new measures affect around 850,000 people, and mean that those in the confined areas will only be allowed to enter and exit the zones on work, educational, legal or medical grounds. Public and private gatherings will be limited to six people and parks will be closed.

The regional premier said the aim was to avoid a return to the state of emergency that underpinned the national lockdown in the spring and summer – “because that’s an economic disaster”.

Ayuso and prime minister Pedro Sánchez are to meet in Madrid on Monday to discuss a joint strategy to “flatten the curve”.

Yet as U-turns have been executed, scapegoats sought and political squabbles indulged, the virus has continued its new spread. Once again the poorest are being hit hardest, and medical resources are coming under growing pressure. Several health centres have had to shut down because of personnel shortages, while others are limping on as best they can.

Flora Espejo, a nurse at the Buenos Aires health centre, offered a succinct appraisal of the situation on Thursday.

“We’re doing what we can,” she told La Sexta TV, but pointed out that the long line of people queueing up outside the clinic were bearing the brunt of things.

As he waited outside the centre to get a PCR test for his five-year-old son, Jonathan Gálvez said he feared the situation would get worse. “It’s tricky enough as it is, but now we’re heading into the flu season,” said the transport worker. “And it’s just shameful that so many health centres are closed.”

Ángela Hernández Puente, a surgeon and deputy general secretary of Madrid’s Amtys medical association, said that while things in health centres were “really bad” – mainly because of chronic staff shortages and the number of health workers off with Covid-19 – Madrid’s hospitals were also beginning to experience an unpleasantly familiar trend.

Across Spain Covid patients occupy 8.6 per cent of hospital beds, but in Madrid, the figure is 21 per cent – and climbing. Two of the region’s hospitals said their intensive care units (ICUs) were already operating at 100 per cent capacity.

“Between non-Covid and Covid patients they’re already full,” said Hernández Puente. “That means they’re having to use areas that have been repurposed as ICUs, but which aren’t actually ICUs. We’re seeing scheduled surgeries being called off, which is tough because there’s a backlog because of the past few months.”

The surgeon, who sounds more tired and more worried than she did less than a fortnight ago, describes the regional government’s handling of the second wave as “absolutely Kafkaesque”.

Given the trends, she added, far more aggressive measures should have been put in place before now.

She acknowledges that Madrid’s population numbers and density, not to mention the high levels of mobility, present their own challenges. “But you can’t just hope that the problem will sort itself out, which is what they seem to be doing.”

Hernández Puente is also sceptical about talk of reopening the enormous field hospital that was set up in Madrid’s main conference centre at the height of the previous peak.

“Where do they think they’ll get the doctors and nurses and nursing assistants from? If they did that they’d have to close the local health centres like they did in the worst moments of the pandemic.”

If a repeat of the spring is to be avoided, she said, there needed to be more solidarity when it came to sharing the burden between hospitals, both public and private. Time, however, is running out.

“I don’t know where all this is going to end,” said Hernández Puente. “I really don’t.” – Guardian