Trump dismisses climate science, saying ‘it will start getting cooler’

US president Donald Trump has dismissed climate science, saying during a visit to fire-scorched California that "it'll start getting cooler, you just watch." Video: The White House 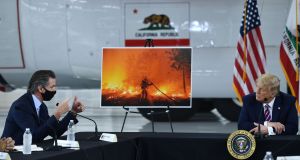 US president Donald Trump was briefed on the fires by California governor Gavin Newsom. Photograph: Brendan Smialowski/AFP via Getty Images

Climate change moved front and centre in the US presidential election on Monday as Donald Trump visited fire-scorched California, and his rival Joe Biden denounced the president as a “climate arsonist”.

As fires continued to engulf the states of Washington, Oregon and California, Mr Trump was briefed on the latest developments by emergency services and California’s governor Gavin Newsom at McClellan Park, just outside Sacramento.

During a roundtable discussion, Mr Trump made no mention of global warming, as Mr Newsom, a Democrat, said climate change was “real” and “is exacerbating” the situation.

However, Mr Trump did intervene at one point to say it “will start getting cooler”, despite experts warning that the planet will continue to become hotter if emissions are not reduced. When California’s secretary of national resources Wade Crowfoot replied: “I wish science agreed with you”, Mr Trump shot back: “I don’t think science knows actually.”

As he arrived in California, Mr Trump emphasised the role that forest management, rather than climate change, played in the fires that have ravaged millions of acres of forests and lands.

“When trees fall down after a short period of time, they become very dry – really like a matchstick, and they can explode,” he said. “Also leaves – when you have dried leaves on the ground, it’s just fuel for the fires.”

Mr Trump has publicly questioned the established science around climate change, and controversially withdrew the United States from the Paris climate accord following his election.

At least 35 people have been killed and 5 million acres of land destroyed by the wildfires which have swept through the pacific states since early August.

Mr Trump announced the visit to California at the weekend, tacking the trip on to the end of two campaign events in neighbouring Nevada on Saturday and Sunday. One of these events – an indoor rally in Las Vegas – was held in defiance of the state’s coronavirus rules limiting mass gatherings to 50 people.

With fears that high winds and even drier conditions could strengthen the existing fires in Washington state, California and Oregon, at the other end of the country, residents of the Gulf Coast states were bracing for Hurricane Sally, which was upgraded from a tropical storm on Monday as it approached the United States.

In response to the fires sweeping through the west coast, Mr Biden delivered a key speech on climate change in Delaware on Monday, in which he denounced the Mr Trump as a “climate arsonist” and a “climate denier”.

He said that the “hellish” wildfires ravaging the west will become more frequent if Mr Trump is re-elected.

“We need a president who respects science, who understands that the damage from climate change is already here, and, unless we take urgent action, will soon be more catastrophic; a president who recognises, understands, and cares that Americans are dying; which makes President Trump’s climate denialism – his disdain of science and facts – all the more unconscionable.”

He said his climate strategy would create more jobs, highlighting the possibilities of renewable energy and electric vehicles.

The former vice-president has also committed to re-entering the Paris climate accord if he wins in November.

In addition to the loss of life and damage to millions of acres of land and forests due to the fires, major cities like San Francisco, Portland and Seattle have been shrouded in smoke-filled air, causing harmful levels of pollution.