How Ireland managed to green the White House 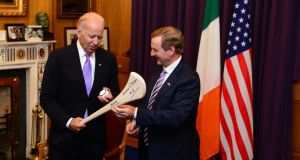 Joe Biden with Enda Kenny at Government Buildings in 2016. Biden has already established that his great-grandfather came from Louth and his great-great-great grandfather from Mayo. File photograph: Dara Mac Dónaill

If Joe Biden were elected president of the United States in November he would be the eighth out of the last 12 US presidents, since Kennedy in 1960, who have acknowledged significant Irish ancestry. Biden had already established that his great-grandfather came from Louth and his great-great-great grandfather from Mayo – he did not need help from the Department of Foreign Affairs to find this out. No doubt experts are now working on Kamala Harris to find an Irish angle, though this may prove a tougher challenge than in the case of Barack Obama.

The US census shows that 33 million Americans, 10 per cent of today’s US population, claim Irish ancestry. The 33 million almost certainly represents an under-estimate, given the massive emigration from Ireland to the US in the century between 1830 and 1930. Thus, it is not surprising that many US presidents have acknowledged an Irish heritage – it is a significant constituency.

While major emigration from Ireland to the US began well before the Famine, the Famine years, and the subsequent period to 1870 saw truly exceptional movement from Ireland. By 1870, 5.5 per cent of the US population were Irish-born and they represented one-quarter of all those alive that year who had been born in Ireland. Another 10 per cent of the Irish-born population were then living in Britain and a further 5 per cent in Canada and Australia. Continuing high emigration up to 1910 helped sustain the numbers of Irish-born in the US. However, after 1910 emigration to the US slowed dramatically, and it all but ended after restrictions were introduced in 1930.

The US census in 1890 estimated that about 3.5 million Irish people had emigrated to the US since 1820. However, already changes in migration patterns since 1870 meant that it declared: “the Germans have contributed far more than any other nationality to the foreign-born element of the country. The next in point of numbers are the Irish.”

While larger in number, very few presidents of the US have claimed German descent, Donald Trump being an exception. Two world wars ensured that German ancestry went out of fashion in the US, and no recent German government has attempted to rebuild a “German-American” base.

There was also major immigration from Scandinavia, but there is no Swedish-American constituency in the US today, though Minneapolis-St Paul commemorates it in an American-Swedish Institute.

The continuing importance for Irish politics of the US dimension since the late 19th century has helped hone the relationship between Ireland and the ancestors of the Irish emigrants. In 1919, Éamon de Valera spent many months in the US trying to build support for Irish independence. However, he was not successful in gleaning the help of the US administration for Irish independence at the Versailles negotiations in 1919.

While the Irish ancestry of recent US presidents goes back generations, nonetheless they have more recently played an important role in supporting Irish governments in resolving the conflict in the North. The fact that Ronald Reagan had Irish roots helped in enlisting his support to persuade Margaret Thatcher to engage in the process leading to the Anglo-Irish Agreement. Again in the 1990s, Bill Clinton played a vital role in facilitating the Belfast Agreement.

Whether 2020 represents the high point in the influence of Irish-America remains to be seen. Today, the Irish-born population in the US is only around 125,000 or 0.05 per cent of the US population, compared to 5.5 per cent in 1870. Thus, the links of ancestry are becoming steadily more distant.

Symptomatic of this changing pattern of migration was the fact that Nancy Pelosi, when addressing the Oireachtas last year, mentioned that, while she had no Irish ancestors, she has Irish grandchildren, something Dominic Raab, the British foreign secretary, will have discovered when they met on Wednesday. Finally, we should not forget that, while the US has never had an Irish-born president (it would be unconstitutional), Ireland had a US-born president in de Valera, born in New York in 1882 and president from 1959-1973.