‘In-between places’ will decide who becomes the next US president

America Letter: US landscape is defined by small towns and cities – so too is its politics

US Democratic presidential candidate Joe Biden has warned people not to trust Donald Trump's suggestion that a Covid-19 vaccine may be near, calling the US president's response to coronavirus "close to criminal." Video: CNN 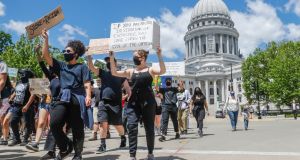 Protesters in Madison, state capital of Wisconsin, in the aftermath of the killing of George Floyd in police custody. Photograph: Lawrence Iles/Icon Sportswire

In Truman Capote’s dark but brilliant novel In Cold Blood, the author takes us on a trip through America’s landscape.

From the murder of the Clutter family that takes place in Holcomb, Kansas, the novel spans the country as the killers traverse the land, from Tallahassee to Miami Beach, Las Vegas through Arizona.

America’s diverse states and towns – the in-between places that sometimes get forgotten – are the backdrop to Capote’s 1966 masterpiece, which is as much a story about the American dream as the first true crime novel.

Capote, who was born in New Orleans, Louisiana, knew that the US was not just about the big cities of New York or San Francisco that dominated representations in contemporary art and literature. For many, the lived experience of America was rooted in the small towns and cities scattered around the country.

Capote’s book, which I picked up in a second-hand bookshop in the small town of Lewes, Delaware, was on my mind this week as I travelled through America’s midwest.

Leaving the city of Milwaukee and heading west, the next stop is Madison.

Like Milwaukee, Wisconsin’s largest city to the east, Madison is reliably Democrat

A small but sizeable city with a population of just over 200,000, Madison is the capital of Wisconsin. As such it epitomises a certain type of American city – many of the state capitals across the country are small, little-known urban centres such as Carson City in Nevada and Jefferson City in Missouri. These capitals are often university towns, but all are dominated by the great dome of the state capitol, where politicians in the state legislature gather to govern and set laws for the citizens of their state.

Named after the fourth president of the United States, Madison was founded by white settlers in the late 1820s. Wisconsin, which is bordered by the Mississippi River in the west, joined the Union in 1848. Immigrants soon followed – many from Germany and Scandinavia, but also some Irish.

Today it is a vibrant town, with a strong progressive streak. Like Milwaukee, Wisconsin’s largest city to the east, Madison is reliably Democrat – a rare patch of blue in a state where most lean Republican.

On this weekday morning under the shadow of the huge granite capitol dome that dominates the main square, there is a bite of autumn in the warm September sunshine.

The air is hazy, however, its strange yellow tint and diffuse light a result of the great fires that are burning more than 3,000km away on the west coast.

Small groups of people are enjoying lunch at the many improvised al fresco dining spaces that have been created due to restrictions on indoor dining. Many of the shopfronts are boarded up with plywood, a reminder of the recent protests that took place in the city following the death of George Floyd.

Wright, like Capote, is just one of the US’s great artistic figures whose formative years were spent in small cities and towns

One of Madison’s most famous sons is Frank Lloyd Wright. The architect was born in nearby Richland Center and spent much of his formative years in Madison and attended university here.

Fifteen minutes later I’m at 441 Toepfer Avenue. The modest, one-storey home at the end of a small suburban block is a Unesco world heritage site. Built in 1937 it is one of several “Usonian” houses Wright designed. The adjective was Wright’s alone. It described his vision of America, and in particular his vision for a specific form of architecture that would capture the character of the American landscape.

The L-shaped house has many of the characteristics that would come to define Wright’s work – strong horizontal lines and flat roofs, exterior materials that have remarkably stood the test of time, and an intimate interplay between the building and its immediate landscape, in this case glass doors at the back of the house that open onto a lush garden.

Wright was to go on to design and build structures across the country – from Fallingwater in rural Pennsylvania, to the Guggenheim Museum in New York, to the Taliesin West in Arizona. His work tells the story of American architecture in the 20th century.

Wright, like Capote, is just one of the US’s great artistic figures whose formative years were spent in small cities and towns across the vast nation – Elizabeth Bishop in Worcester Massachusetts, William Faulkner in Oxford, Mississippi.

As the United States prepares to go to the polls in November, it is worth remembering that it is the residents of the small cities and towns like these – Madison, Wisconsin; Scottsdale, Arizona; Cleveland Ohio – that will ultimately decide the outcome of the presidential election.