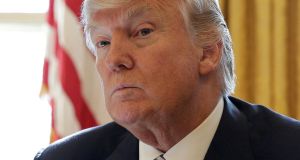 US president Donald Trump may have pierced a malaise, as more millennials show interest in running for office. Photograph: Joshua Roberts/Reuters

As Trump blusters about repealing Obamacare, many Americans have come to appreciate the benefits of the law more. Lena Dunham credited the “soul-crushing pain and devastation and hopelessness” of Trump with helping her get a svelte new figure. Trump may even have pierced the millennial malaise, as we see more millennials showing interest in running for office.

Similarly, whenever Trump rants about Alec Baldwin’s portrayal of him and tweets that Saturday Night Live is “not funny,” “always a complete hit job” and “really bad television!,” the show’s ratings go up. They are now at a 20-year high. Trump was roundly mocked for turning his Supreme Court announcement into an episode of The Bachelor, but it must be said that the president has more talent for devising cliffhangers than anyone since Charles Dickens.

Administration officials told The Times that the White House even got Judge Thomas Hardiman, the runner-up to Neil Gorsuch, to play along and help make the final rose ceremony suspenseful by feinting a drive toward Washington. It was unbelievably schlocky, and yet the end result was a national civics lesson, with a whopping 33 million-plus people tuning in. 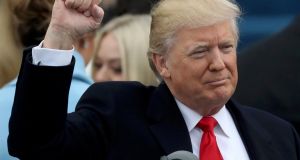 Ordinarily staid Senate hearings for Cabinet choices are now destination TV. As Trump puts forth people who want to plant Acme dynamite in the agencies they will head and as Republicans at the federal and state levels push their conservative agenda, Americans have a refreshed vigour for debating what’s at stake for the environment, education, civil rights and health insurance – and a new taste for passionate, cacophonous town halls.

Trump has made facts great again. By distorting reality so relentlessly, he has put everyone on alert for alternative facts. “With great assurity,” as Trump likes to say, the president has also made White House press briefings relevant again by raising the stakes. The Times’s Michael Grynbaum calls Sean Spicer’s live briefings “daytime television’s new big hit” – outdrawing soap operas such as General Hospital and The Bold and the Beautiful. The press must battle every day to wrest the truth from the tangled web of West Wing deceit, delusion and charges of “fake news blah blah blah,” as CNN’s Jake Tapper called it.

The astonishing part is Trump’s self-restraint. Given that he used to pretend, with fake names, to be his own press agent, spinning flattering tall tales about himself, it’s amazing he hasn’t started live-tweeting his ameliorations and fashion notes for the hapless Spicer during press briefings. Or pushed Spicer aside and taken the podium himself under the guise of John Barron to assure reporters that the sterling president Trump knows nothing about Michael Flynn’s playing footsie with the Russians.

As he alarms and exhausts, the Short-Fingered Vulgarian deserves this credit at least: We’re all on our toes now. The pink pussyhats are at the barricades, on the watch for any curtailment of women’s rights and any mansplaining by older white Southern men. There was no way – given the fierce urgency of the Trump resistance – that Mitch McConnell was going to get away with shushing Elizabeth Warren on the Senate floor as she tried to read a letter by Coretta Scott King criticising Jeff Sessions.

The president loves his pat-and-yank handshakes and hugs and blown kisses with male VIPs. “I grabbed him and hugged him because that’s the way we feel,” he said of greeting Japan’s prime minister. But The Times’s Maggie Haberman reports that the White House radiates with the misery of staffers. (And the paranoia of the in-over-his-head megalomaniac holed up alone in the residence.) The riled-up art scene has taken to trolling the Troller in Chief. The Museum of Modern Art dropped its customary detachment on politics to protest Trump’s ban on refugees from seven predominantly Muslim countries by replacing artwork on display by Cézanne, Picasso and Matisse with contemporary works from Iran, Iraq and Sudan.

The Public Theater announced it would open Shakespeare in the Park in May with Julius Caesar, a play about a populist seeking absolute power. The play, the theatre said, has “never felt more contemporary”. Given the fever pitch on both sides, we are going to have to pace ourselves, as Barack Obama’s former chief strategist David Axelrod tweeted.

Still, the main way that Trump is proving that America is great is that the affronted and angered are rising up to take him on. Institutions designed to check a president’s power and expose his scandals – from the courts to the comics to the press – are all at Defcon 5 – a state of military alertness – except for the Republican Congress, which seems to be deaf.