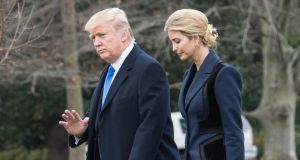 US president Donald Trump and his daughter Ivanka about to board Marine One at the White House in Washington, DC, earlier this month. File photograph: Nicholas Kamm/AFP/Getty Images 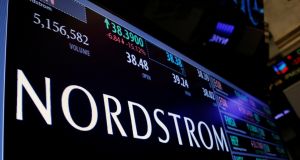 Trading information for fashion retailer Nordstrom on a screen on the floor of the New York Stock Exchange in New York City. File photograph: Brendan McDermid/Reuters

US clothes retailer Nordstrom’s sales of Ivanka Trump’s line of clothing and shoes fell by nearly one-third in the past fiscal year, with sharp drops in sales weeks before her father Donald Trump was elected president, the Wall Street Journal (WSJ) has reported.

Nordstrom announced this week it had decided to stop carrying Ivanka Trump’s apparel, prompting President Trump to take to Twitter to defend her. “My daughter Ivanka has been treated so unfairly by @Nordstrom,” he said on Wednesday.

The WSJ cited internal Nordstrom data as showing sales of Ivanka Trump’s products were more than 70 per cent lower in the second, third and fourth week of October compared to the same weeks the previous year. The election was held on November 8th.

Nordstrom spokeswoman Tara Darrow said that the retailer did not provide the WSJ with data on Ivanka Trump’s sales. “We have not and will not share specific sales results numbers related to this brand or any other brand,” Ms Darrow said in an email.

In addition to the president, others in the administration expressed support for Ivanka Trump’s business.

Senior White House adviser Kellyanne Conway was accused of violating ethics rules after she went on television to urge people to buy Ivanka Trump’s products in what she called “a free commercial.”

Republican Jason Chaffetz, chairman of the House of Representatives Oversight committee, said on Thursday he had asked the Office of Government Ethics to review Ms Conway’s comments and recommend disciplinary action against her if warranted.