‘It. Is. Not. Going. To. Happen’: Wilders trades barbs on March poll 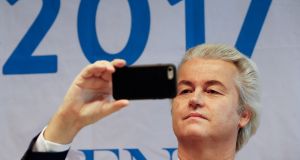 Anti-Islam Dutch politician Geert Wilders said on Sunday that promises by other parties not to work with him would be quickly forgotten if, as expected, his far-right Party of Freedom gets more than 30 parliamentary seats in next month’s election.

He then traded barbs on Twitter with prime minister Mark Rutte about who will work with whom after the March 15th vote.

Mr Wilders has proclaimed that Europe is about to enter a “Patriotic Spring” in which populist parties will triumph in the Netherlands and France following last year’s vote by Britain to leave the European Union and the election of Donald Trump as US president.

Party of Freedom leads in most opinion polls, with Mr Rutte’s conservative VVD party in second place. But the VVD and other Dutch mainstream parties have said they will not enter into a coalition with Mr Wilders because his platform calls for banning mosques and the Koran as well as leaving the EU.

In his first major televised interview ahead of the election, Mr Wilders said on Sunday that those promises would be ditched if Freedom gets 30 or more seats in the 150-seat Dutch parliament.

“In the first place, they’ll have to,” he said. “You can’t just shove two and a half million people aside after democratic elections, that would be very ill-advised.”

He predicted a non-violent “revolt” if Freedom is sidelined and added that alternative left-right coalitions encompassing five or more parties - the only alternative on current projections - would prove unworkable.

That kind of coalition would “be so unstable that not only will it not serve the country, but it will be lying on its ass within a year, to put it crudely”, he said.

In response, Mr Rutte tweeted a link to a video clip of himself categorically ruling out co-operation with Mr Wilders.

“Zero per cent [chance] Geert, ZERO per cent. It. Is. Not. Going. To. Happen”, he tweeted on his personal account, the first time it has been used in five years.

The VVD said Mr Rutte’s tweet represented both his personal position and the party line.

Mr Wilders, a prolific user of Twitter, quickly shot back: “It’s the voters who are in charge of this country Mark, for a HUNDRED per cent. And. Nobody. In. The. Netherlands. Still. Believes. You.”

In the interview, Mr Wilders repeated remarks he has made frequently in the past, offensive to many, comparing the Koran to Hitler’s Mein Kampf.

A self-avowed admirer of Mr Trump, Mr Wilders said the Netherlands does not need to build a wall to keep out foreigners but should re-establish border controls.

In December, Mr Wilders was convicted of insulting Moroccans and inciting discrimination against them for leading supporters in chanting they wanted “Fewer! Fewer! Fewer!” of them in the country.

He is appealing the ruling.