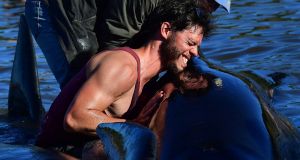 A volunteer cares for a pilot whale during a mass stranding at Farewell Spit in New Zealand. Photograph: AFP/Getty Images . 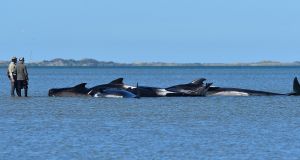 This photograph taken on Saturday shows fishermen looking at pilot whales who died in a mass stranding at Farewell Spit. Photograph: AFP/Getty Images 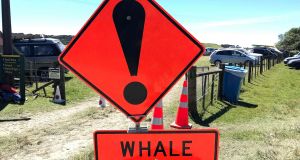 New Zealand conservation authorities said 240 pilot whales that were stranded overnight at a remote bay which only days earlier had a larger beaching refloated themselves on Sunday and were swimming offshore.

“We had 240 whales strand yesterday in the afternoon and we were fearful we were going to end up with 240 dead whales this morning,” Herb Christophers, a Department of Conservation spokesman said.

“But they self-rescued, in other words the tide came in and they were able to float off and swim out to sea.”

The pod was the second large group to strand itself in recent days at Golden Bay, at the northwest tip of the South Island, in one of the worst mass strandings in New Zealand.

On Thursday evening, a conservation worker spotted that about 400 whales had washed ashore. Hundreds of volunteers spent days pouring water over the beached whales to try and keep them cool, while waiting to catch high tides to carry them out to sea again.

But most of the whales from that pod died. Officials will soon have to start clearing the carcasses, Christophers said.

The strandings have been New Zealand’s largest in decades.

The precise cause was not known, though beached whales are not uncommon at Golden Bay.

Its shallow muddy waters confuse the marine mammals’ sonar, leaving them vulnerable to stranding by an ebb tide, according to marine environmental organisation Project Jonah.

Pilot whales are not listed as endangered, but little is known about their population in New Zealand waters.