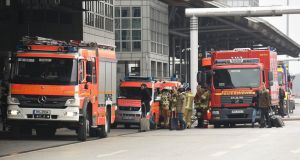 Firemen at Helmut Schmidt airport in Hamburg, Germany, on Sunday. The airport has reopened after an unknown substance had been found in the security check area. Photograph: Fabian Bimmer/Reuters

German authorities briefly closed Helmut Schmidt Airport in the northern city of Hamburg on Sunday after a discharge of a corrosive substance caused eye irritation and breathing difficulties among 50 people in a security check area, a police spokeswoman said.

Firefighters and ambulances were rushed to the scene after the incident, which occurred in an area where passenger luggage is scanned by security staff.

Firefighters are trying to determine the source of the discharge and the nature of the corrosive substance.

A spokeswoman for the airport said flights had resumed as of 12.45pm Irish time.

According to live flight tracking website flightradar24.com, some flights were diverted to other airports due to the incident.