Donald Trump says he will not appeal travel ban ruling

US president is instead considering a new executive order on immigration

During a Q and A on Air Force One, Donald Trump said he is considering issuing a revised travel ban executive order. Trump also responded to Iran President Hassan Rouhaniho's remarks that anyone who speaks to Iranians with threats would regret it. 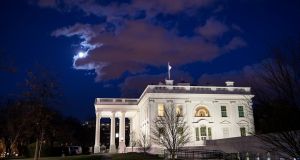 US president Donald Trump said late on Friday he is considering issuing a new travel ban executive order, while a White House official said the administration did not plan to escalate a legal dispute over Mr Trump’s original travel ban order to the supreme court.

Mr Trump’s original order banning entry to the US by refugees and citizens of seven Muslim-majority countries was put on hold by a federal judge in Seattle last week with a temporary restraining order, and that suspension was upheld by a federal appeals court in San Francisco on Thursday.

While on Air Force One en route to Florida from Washington, Mr Trump said that he was considering “a brand new order” that could be issued as soon as Monday or Tuesday, if the administration decides to move in that direction.

Separately, a White House official said: “We are actively considering changes or other executive orders that will keep our country safe from terrorism.”

The official said: “The temporary restraining order, we would not take to the supreme court, but we are reviewing all options in the court system.”

Meanwhile, the San Francisco appeals court on Friday asked the US justice department and the state of Washington to submit briefs on whether a larger panel of judges should decide if president Donald Trump’s original travel ban should remain on hold.

A three-judge panel at the 9th US Circuit Court of Appeals had refused to reinstate the ban.