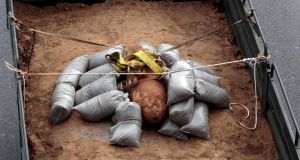 A 250kg second World War bomb found during excavation works at a Thessaloniki gas station in Greece is carried away on a military truck following an operation to defuse it. Photograph: Alexandros Avramidis/Reuters 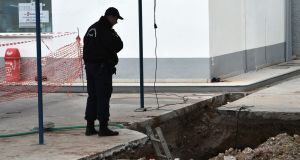 A policeman looks at the hole where an unexploded bomb dating from the second World War was found during work to expand a petrol station in Thessaloniki. Photograph: AFP/Getty Images 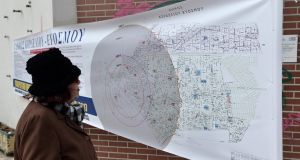 A resident looks at a map showing the radius of evacuation areas, analogous to the potential blast radius, ahead of an operation to defuse a second World War bomb in Kordelio, a suburb of Thessaloniki, Greece, on February 12th, 2017. Photograph: Sakis Mitrolidis/AFP/Getty Images

Thousands of Greeks evacuated their homes in the second-biggest city of Thessaloniki on Sunday to allow experts to defuse a second World War bomb.

The 250kg bomb was discovered about 5 metres below ground during excavation works at a petrol station last week.

Up to 72,000 residents living within a 2 km radius of the bomb site were asked to leave their homes in one of the country’s biggest peacetime evacuations. Buses were taking them to local gyms, stadiums and cafes, police said.

Refugees and migrants living in a camp in a nearby abandoned factory would also be evacuated on Sunday and taken on a museum visit in Thessaloniki, the migration ministry said.

Military experts will attempt to defuse the bomb on the spot.

“I call on our fellow citizens to stay calm. There is no reason to panic, there is no danger, the measures taken are precautionary and for the safety of residents.”

The complex operation was expected to last “at most six hours,” Mr Tzitzikostas said.