During a Q and A on Air Force One, Donald Trump said he is considering issuing a revised travel ban executive order. Trump also responded to Iran President Hassan Rouhaniho's remarks that anyone who speaks to Iranians with threats would regret it. 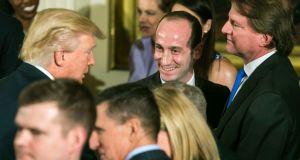 A White House official on Sunday launched a blistering attack on the federal appeals court that blocked President Donald Trump’s executive order on immigration, calling its ruling a “judicial usurpation of power”.

The Trump administration has faced multiple legal setbacks to its travel ban issued, on January 27th, and the Republican president has said he may issue a new order rather than go through lengthy court challenges to try to have the ban reinstated.

“We don’t have judicial supremacy in this country.”