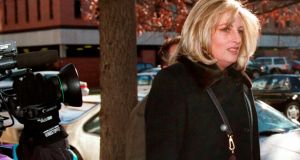 In this December 14th, 1998, file photograph Linda Tripp arrives at the offices of Judicial Watch, a public interest law firm, in Washington to give a deposition in a lawsuit about the FBI files controversy. Photograph: AP

Tripp was working as a public affairs specialist at the Pentagon where she reportedly became friends with Ms Lewinsky, who previously was a White House intern.

She made secret tapes of conversations with Ms Lewinsky about her affair with Mr Clinton and passed them on to an independent prosecutor.

The investigation, led by Kenneth Starr, ultimately led to Mr Clinton’s impeachment. He was acquitted by the US Senate and remained in office.

Her death was confirmed by lawyer Joseph Murtha who said she died on Wednesday.

Tripp was a secretary in the White House counsel’s office in the early years of Mr Clinton’s presidency before she was transferred to the Pentagon’s public affairs office and befriended Lewinsky, 24 years her junior. As the two became close and Lewinsky revealed her past sexual relationship with Clinton, Tripp began clandestinely recording their private telephone conversations in which Lewinsky documented her affair with the president in graphic detail.

Tripp ultimately turned over hours of those tapes to Mr Starr, who was investigating potential wrongdoing by Clinton, the former Arkansas governor, stemming from the failed Whitewater real estate venture in the Ozarks.

Tripp was granted immunity from illegal wiretapping charges in exchange for the recordings. – Agencies