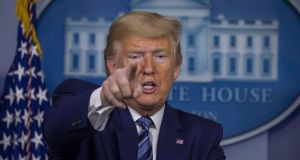 US president Donald Trump takes a question during a Coronavirus Task Force news conference at the White House on Sunday. Photograph: Bloomberg

The coronavirus pandemic in the United States will “peak” in the new few days, US president Donald Trump has warned, as he again touted the anti-malarial drug hydroxychloroquine as a treatment for the virus.

“I just think… What do you have to lose?” he said of the drug that has not yet been approved to treat Covid-19. He continued: “What do I know, I’m not a doctor… but I have common sense.”

He advised Americans without a heart condition to consider the drug. But he stressed that the government has purchased and stockpiled 29 million pills of hydroxychloroquine.

“A lot of drugstores have them by prescription and they’re not expensive,” he said. The drug, which is also used to treat rheumatoid arthritis, lupus and other autoimmune diseases, has not yet been approved for coronavirus treatment by the Food and Drug Administration.

Asked why he was promoting the medicine, he said: “I’ve seen people who are going to die without it…what really do we have to lose?”

“I am not acting as a doctor, I’m saying, do what you want,” he continued. “I’d love to go to a laboratory for a number of years… we don’t have time.”

As the number of deaths from coronavirus in the United States approached 10,000, Dr Deborah Birx, the head of the White House Coronavirus Task Force, said that the current trend in Italy, was “giving hope to what our future could be”.

“We do see hopeful signs in Spain and Italy,” she said, saying that social distancing is beginning to have an effect.

Displaying slides and graphics she said that the greater New York area was the epicenter of the crisis, but warned of a rising number of cases in Washington DC, New Jersey and Pennsylvania. New Orleans and Detroit continued to see a heightened number of instances also, she said.

Mr Trump began the Sunday evening briefing – which had not been on the White House schedule earlier in the day – by wishing British prime minister Boris Johnson well “as he wages his own personal fight with the virus”.

“All Americans are praying for him,” he said. “He’s a friend of mine. He’s a great gentleman and a great leader. As you know he was brought to the hospital today but I am hopeful and sure that he is going to be fine. He’s a strong man, a strong person.”

Predicting “light at the end of the tunnel,” Mr Trump said America had now tested and received results for 1.67 million people with suspected coronavirus. “That’s far more than any other country has been able to do,” he said, adding: “Remember we inherited a broken system.”

He said that Fema – the Federal Emergency Management Agency – was distributing supplies and personal protective equipment to states in need across the country.

But he hit out at Illinois governor Jay Pritzker. “I hear him complaining all the time,” he said, noting that 2,500 extra beds were being set up in Chicago. “He’s not able to do what he’s supposed to do … he has not performed well.”

Rear admiral John Polowczyk, who is coordinating logistics and supplies for the White House coronavirus taskforce, said that three flights had arrived from Asia over the weekend carrying medical gowns, masks and gloves, which have been “pushed out across the nation.. prioritising points of care”.

Pressed on the fact that some countries are reporting receiving faulty equipment from China, Mr Trump said: “They’re not sending faulty things to us.”

Mr Trump was speaking against the background of a rising number of coronavirus cases, with New York continuing to see the highest number of cases. The United States has now reported 337,000 cases and almost 10,000 deaths.

Earlier on Sunday, the United States surgeon general, Jerome Adams, warned that “the next week is going to be our Pearl Harbor moment”.

Dr Anthony Fauci, head of the National Institute of Allergy and Infectious Diseases, warned that America was facing a “bad week,” stating that the county was struggling when asked if the country had things under control.