Coronavirus an opportunity for Beijing to usher in Chinese century

Europe Letter: With the West in decline and China rising, old certainties are crumbling 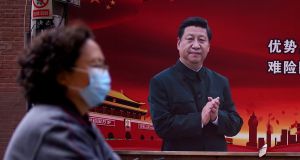 It is difficult to know the future implications of a moment in history while you are still living through it.

But one of the most striking indications that the pandemic will be a historical marker must be the hints from Saudi authorities that they may cancel the hajj.

The annual pilgrimage of millions of Muslims to Mecca and Medina, due in high summer this year, was not even cancelled during the Spanish Flu a century ago.

A local newspaper noted the last time the hajj had been cancelled was 1213 in the Islamic calendar or “during the French campaign”, meaning the year 1798, when Napoleon invaded Egypt.

The era-shaping nature of pandemics is evident in the language we use about them.

“Quarantine” comes from the Venetian term for “40 days”, referring to the time ships had to be isolated before passengers could disembark. It’s a policy to protect port cities from disease dating from the Black Death in the 14th century.

“Cordon sanitaire”, now mostly used to refer to the exclusion of unsavoury politicians, is an epidemic response measure. It refers to lining up troops along the site of an outbreak to prevent people leaving and spreading the disease.

Germany’s Robert Koch Institute, a public agency that releases daily Covid-19 diagnoses and deaths, is named for the 19th-century microbiologist who discovered the causes of tuberculosis and cholera.

In Koch’s time, as now, responses to epidemics were political.

According to the historian Richard Evans, economic concerns influenced the reaction of authorities in the city of Hamburg to the spread of cholera from the east after the British colonisation of India.

The merchant rulers of what was then one of the world’s most important port cities rejected Koch’s theory that cholera was spread by waterborne bacteria, which would have made the case for costly quarantines of ships.

Instead, they favoured doctors who promoted the “miasma theory” that the disease was caused by bad air, which allowed trade to keep flowing and enabled the breakout of Europe’s last serious cholera epidemic in 1892.

Efforts against cholera led to such modern conveniences as sewerage and water systems, and according to Evans, led to Hamburg becoming more German, as its Anglophile merchant class and their laissez-faire influences were reined back.

Beijing sees the current pandemic as an opportunity to begin a Chinese century to supersede the American one.

There has been speculation about such a shift for years, as the Chinese economy edges closer to becoming the world’s largest, regaining the position it lost to the United States in 1890.

Seen from abroad, the United States appears not to have lost its global dominance so much as abdicated it.

Its leadership and healthcare system appear so incapable of meeting the challenge that some analysts have asked whether the pandemic could be the American “Suez crisis” – the farcical attempt to take back the canal from Egyptian nationalists in 1956 that demonstrated Britain was manifestly no longer the power it had been.

US insistence that the disease be termed the “Wuhan virus” in a dig at China prevented the G7 economies making a joint statement on the pandemic. With US leadership absent and no other power apparent to assume the role, a video conference of the larger G20 could produce nothing more useful than platitudes.

Some in the European Union dream the bloc could one day assume the role. But not today, because its nation states are too divided, and too many of them don’t want it to.

It is too early to know how the pandemic will affect the reputation of the World Health Organisation, but there are grumbles about its hesitancy in recommending travel restrictions in the earlier stages of the outbreak.

The clout of China was apparent when WHO senior adviser Bruce Aylward awkwardly wriggled out of saying the name “Taiwan” in an interview with Hong Kong broadcaster RTHK this week.

Though Taiwan has emerged as a model country in its pandemic response with early intervention that has kept its cases to 329, Beijing’s muscular foreign policy position that the island must be deemed a breakaway Chinese province rather than a state has blocked it from having observer status at the WHO.

One thing for certain is that recent years have definitively seen off Francis Fukuyama’s 1992 theory that the collapse of the Soviet Union heralded “the end of history”, a notion that is now an exotic relic of the heyday of western liberal democracy.

On the contrary, old cold war divisions seemed to walk right out of the history books with the arrival of doctors from China, Cuba and Russia to help Italy in a fanfare of publicity before western countries could respond.

In the world of ideas, austerity is decidedly out. Beloved tenets of market globalisation such as offshoring and just-in-time efficiency have been abruptly shown up by the fragility of supply chains for essential goods, from ventilators and food to toilet roll.

And from big state intervention, to individual sacrifices for the nation, to closed borders, a lot of retro ideas are back.