‘You’re on Belgian territory and you have to pay the toll,’ paramedic crew told 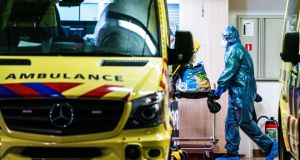 A health worker pushes a stretcher near an ambulance in Tilburg, the Netherlands. File photograph: Rob Enegelaar/ANP/AFP via Getty

An ambulance carrying a coronavirus patient from one Dutch hospital to another was delayed for more than 20 minutes at a motorway tunnel toll booth near the Belgian port of Antwerp until the ambulance paramedic used his personal debit card to pay the €6 charge.

With the Netherlands expected to officially extend its “intelligent lockdown” beyond April 6th in response to a death toll standing on Monday at 864, with 11,750 confirmed cases, there was outrage online when the furious paramedic took to Facebook to tell what happened.

Although the usual protocol is for the barrier to be raised at toll booths at the approach of an ambulance or any other emergency vehicle, that didn’t happen as the ambulance approached the Liefkenshoek tunnel, part of the ring road around Antwerp, on Sunday night.

“We were carrying a female patient suffering from coronavirus, she was on oxygen and so she was stable, but we knew time was of the essence which is why we took the tunnel,” said the paramedic, Martijn Hendriks. “We were expecting to be waved through.”

After sitting at the barrier for a several moments and getting no response, Hendriks said, they decided to switch on the ambulance’s blue lights.

Still the barrier remained closed, until after another minute or two, he and his partner, who was driving, were told over the intercom that they would have to pay the toll charge of €6 before they could carry on to the hospital.

By now, almost 10 minutes had passed, said Mr Hendriks, and they had no option but to reverse away from the barrier and go to the booth to explain about their patient.

The response from the operator was unyielding, he says: “You’re on Belgian territory and you have to pay the toll.”

The ambulance crew then attempted to pay with cash but this was refused in case it was “infected”.

Because they were both wearing protective suits, the ambulance driver wasn’t carrying his wallet but Mr Hendriks was – and duly paid the charge.

“Whether we were in an ambulance or not, carrying a coronavirus patient or not, we had to pay”, said Mr Hendriks. “In these times when everyone is expected to help everyone else, we were stunned.”

The tunnel operator confirmed it operates a wave-through policy for emergency vehicles. “This should not have happened”, it told local media.

Sweden should have done more to combat coronavirus, health chief says 10:51
Pope Francis condemns racism and street violence in US 10:20
Trudeau lost for words when asked about clearing of protesters for Trump photo 09:55
Chinese doctor’s death from Covid-19 prompts anger over lack of protection for hospital staff 09:17
Cyclone Nisarga makes landfall near Mumbai as storm surge threatens to flood slums 11:46