This time, the future of the euro really is at stake

Dutch rejection of financial plans is incomprehensible to outsiders 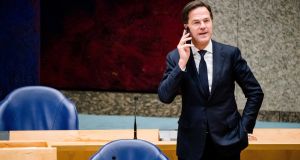 Dutch prime minister attends a debate in the House of Representatives on the developments surrounding the Covid-19 pandemic in The Hague, the Netherlands. Photograph: Bart Maat/EPA

It took 16 hours of video conferencing for the finance ministers of the euro zone to find out that once again, they could not agree.

As the ministers and their aides emerged blearily out into the sunlight of Wednesday morning in their respective capitals, the mood was pitch black. “I think I would summarise it by saying positions haven’t changed, but the mood has changed, and the mood has gotten worse,” an official said.

One dream of what the future of Europe might look like was already over: the idea that it could be shaped by the so-called New Hanseatic League.

Called the Hansa for short, this collection of the Netherlands, Ireland, and Baltic and Scandinavian states was brought together by the departure of Britain from the European Union. As a group, it hoped to replace the UK’s clout on economic matters and defend a trade-friendly, pro-business viewpoint.

Ireland left it by joining the call of nine states including, Italy, Spain and France, for joint debt issuance in the form of eurobonds or coronabonds.

The northern gang was never a perfect fit for Ireland anyway. But the attitude of the Netherlands in the past few days of negotiations has made the departure final.

Ireland, in tune with southern states, has been appalled by The Hague’s staunch blocking of proposals to dig European economies out of disaster and debt spiral caused by the pandemic.

In the Netherlands, jointly-backed debt is commonly likened to taking over your neighbour’s mortgage, an unfair characterisation that draws on an old misapprehension that the euro zone bailouts were gifts from Dutch and German taxpayers, rather than loans repaid with interest. Naturally, the Irish view is more nuanced.

But it’s not just joint debt. Dutch finance minister Wopke Hoekstra was also the last man blocking a proposal to allow states to borrow from the bailout fund without the condition that they must balance the books.

Germany was once the champion of this view that indebted countries can’t be given easy money because they won’t learn their lesson. But Berlin sees the pandemic as different to crises of the past, and objects to joint debt more on the grounds that rushing into such a commitment, like a Las Vegas marriage, might end badly.

It was the vote of a party with 19 seats in the Dutch parliament, the europhile D66 party, that confirmed to international observers that a different reality held within the borders of the lowland state. By joining much of the opposition to back Mark Rutte’s government’s rejection of joint debt, the party sank international hopes the prime minister might come under domestic pressure to cave.

Some officials believe the Dutch will come in time to see that the stakes are high for them too. But not until it has become clear that the euro itself is under threat, great economic damage has been wreaked, and seeds of bitterness between EU countries have been sown deep.

The great fear is that by then it will be too late to turn back a tide of disgust in Italy towards the entire EU project.

The Italian economy has hardly grown since it joined the euro in 1999. You can take your pick of domestic problems to blame: onerous laws that people ignore, a musical-chairs succession of weak governments, an aging population.

But the fact is that the country has not seen the benefits of the euro. It has people old enough to vote who have known only economic stagnation. That’s despite the country’s continued strengths in manufacturing, science, and culture, and it being one of the most popular tourist destinations in the world.

Over the course of two decades of using the euro Italy has turned from one of Europe’s most europhile nations to one of its most eurosceptic. The political results of this were already apparent with the country’s election of euro-critical parties into power.

But the coronavirus pandemic appears to have radicalised public opinion.

Since EU countries failed to respond to an appeal from Rome for emergency supplies, Italian media has been a maelstrom slights and wounds from fellow EU countries. Some are real, some spurious, but all are deeply felt as they were accompanied by gruesome death tolls of close to 1,000 a day.

The blunt Dutch rejections seem to come from another universe, never mind from the same currency area.

In the past, joint debt has been proposed as a solution to a structural flaw in the euro, which is a single currency, used by very different economies, that do not agree enough or share enough power to fix the deep imbalances this creates.

In the past, those imbalances were addressed only when they came close to bringing the whole project crashing down.