Trump threatens to withhold funds from ‘China-centric’ WHO

US president claims health body made mistakes: ‘They didn’t see it, how do you not see it?’

US president Donald Trump threatens to withhold money pledged to the World Health Organisation (WHO) over its handling of coronavirus. The WHO raised the alarm in January, after which Trump made statements downplaying the danger. Video: Reuters 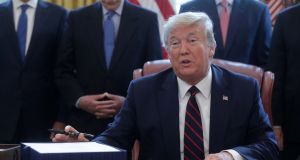 A file image of US president Donald Trump at a signing ceremony for the $2.3 trillion coronavirus aid package bill in the the White House last month. Photograph: Reuters

US president Donald Trump has threatened to withhold money pledged to the World Health Organisation over its handling of coronavirus, as he accused the global body of being “very China-centric.”

“They called it wrong,” he said of the coronavirus that has claimed tens of thousands of lives across the world.

Noting that America pays “the biggest portion” of funding to the health body, he highlighted the fact that the organisation criticised his decision to ban flights from China in January.

“They actually criticised and disagreed with my travel ban,” he said at the White House coronavirus briefing on Tuesday evening. “They seem to be very China-centric. We have to look into that.”

Later in the briefing he said he had not made any final decision on whether to withhold funding.

“I mean, I‘m not saying I‘m going to do it ... I said we’re going to look at it. We’re going to investigate it. But we will look at ending funding,” he said. But earlier in the day he had attacked the organisation on twitter.

The most recent figures available suggest that the US contributed just over $500 million to the WHO in 2017. The Geneva-based body has an annual budget of approximately $5 billion.

During the briefing, Mr Trump also touted the US response to the coronavirus, pointing to glimmers of “very strong hope.”

“Signs are that our strategy is totally working,” he said. But he warned that this week “will be a very painful week,” as he predicted that coronavirus cases in the US may be peaking.

Mr Trump also said Britain had asked the US for 200 ventilators.

Mr Trump was speaking as the number of deaths from coronavirus in the United States continued to rise, with more than 340,000 cases and over 12,000 deaths now reported across the country.

New York registered its biggest single-day increase in deaths on Tuesday, with 731 people dying from the virus, bringing the total number of deaths in America’s hardest-hit state to just under 5,500.

Nonetheless, Governor Andrew Cuomo pointed to a continuing fall in hospitalisations, underlining his view that the disease may be plateauing in the state. Mr Cuomo said that plans were being made about how best to restart the economy, adding that he was consulting with governors in neighbouring states like New Jersey.

“We have to start planning restarting life. We’re not there yet. This is not a light switch we can just flip one day and everything goes back to normal,” he said.

In Wisconsin, the Democratic primary and state and local elections took place on Tuesday, after the state and US Supreme Courts ruled the April 7th date could not be postponed due to the coronavirus.

It followed a bitter debate between the Republican-controlled legislature in the state and the Democratic governor who tried to postpone voting, but was ultimately blocked by the courts.

There were reports of long queues at voting stations, particularly in urban parts of the state like Milwaukee. Outlining why she had opposed the decision, Supreme Court justice Ruth Bader Ginsburg, said she feared the order will “result in massive disenfranchisement.”

Mr Trump said the reason Democrats complained about the elections taking place was because he had endorsed a Republican candidate for a judicial position.

Yesterday also saw series of personnel changes in Washington, despite political activity slowing down in the city due to the pandemic.

Thomas Modly, acting secretary of the navy, submitted his resignation, following the emergence of leaked audio of him addressing the crew of the HSS Theodore Roosevelt which is currently docked in Guam.

In a 15 minute address to sailors aboard the aircraft carrier which was broadcast through the vessel’s radio system, Mr Modly criticised their former captain, Brett Crozier, who was fired after raising concerns over the spread of coronavirus onboard.

Mr Crozier has since announced he has contracted the virus, in addition to hundreds of the sailors on board.

Mr Modly’s departure came hours after it emerged that Mr Trump had fired the chair of a new panel established to oversee the management of the $2.2 trillion financial package agreed by Congress last month.

Also on Tuesday, Stephanie Grisham, who replaced Sarah Huckabee Sanders last year as the White House press secretary, was removed from her post.

She will return to her position in the East Wing as chief of staff to Melania Trump. She will be replaced by Kayleigh McEnany, the former spokeswoman for the Republican National Committee, who currently works for the Trump re-election campaign.

The 31- year-old is a frequent defender of the president on cable news channels. The personnel change was widely seen as a move by incoming chief of staff Mark Meadows, who replaced Mick Mulvaney last month who was appointed the new Northern Ireland envoy.

Ms Grisham was the fourth person to hold the position of White House press secretary, but did not held a single daily White House briefing during her eight- month tenure.