Coronavirus: Sweden to enact crisis powers but hold them in reserve 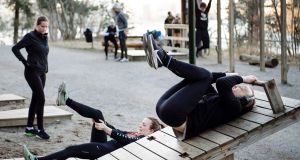 People at an outdoor gym on the outskirts of Stockholm: new powers are expected to be backed by the Riksdag parliament on Wednesday. Photograph: Erik Simander

Sweden has reached cross-party agreement on sweeping emergency powers to close shops, restaurants and schools in response to the coronavirus crisis – but the governnment has no immediate plans to use them.

The new powers are expected to be backed by the Riksdag parliament on Wednesday, but keeping them in reserve indicates Sweden is anxious to maintain an approach to virus control more liberal than its European neighbours.

In voluntary rather than mandatory measures, Swedes have been asked to keep their distance from each other, stay home if they feel ill, work from home if feasible and avoid older people if possible.

However shops, bars and restaurants remain open, events with up to 50 people are permitted and only secondary schools have closed – although they are expected to open again soon for state examinations.

Swedish health minister Lena Hallengren has insisted the government has no concrete plans to use its new powers, applicable from April 18 to June 30th. Instead the measure is precautionary, allowing the government to act quickly, bypassing parliament if needed, rather than wait for parliamentary backing for emergency measures.

“Even if parliament works fast, it can mean that we lose days and we are not prepared to take that risk,” she said.

On Tuesday, Sweden, with a population of 10 million people, had 7,693 confirmed cases of Covid-19 with 591 deaths linked to the condition.

Despite a rising number of deaths, state epidemiologist Anders Tegnell – a key figure in Sweden’s liberal approach – pointed to a drop in registered new confirmed cases in recent days as a “good sign”. However, he said it was not yet possible to say if the peak had been reached.

On Monday, neighbouring Norway said it had the virus under control. With a population of 5.4 million it has 5,869 cases and 88 deaths. Its reproduction rate – the number of people infected by a coronavirus patient – is less than one, considered an effective stop to transmission.

But many Swedish health workers, scientists, mathematicians and media outlets fear that diverging from the rest of Europe in the pandemic could yet lead to disaster.

“The last days were so depressing, now the patients with Covid-19 are really starting to flow to us and they are sick, really sick,” said Anne Rosedahl, a nurse in the city of Uppsala. In a Facebook post shared 42,000 times and commented on 12,000 times, she added: “Of those we are treating at present, half are under 50 and not everyone had previous conditions.”

As Stockholm maintained its status quo – but prepared for a shift if required – Finland announced it is tightening border traffic to Sweden for a month.

Normally this is an open Schengen border, crossed by thousands of families and commuting workers each day. Now people will need permits from employers on the other side, confirming their work is essential.

Finnish virologists have warned of a “significant risk” after an infections spike in the Lapland region, where some 2,000 border crossings still take place daily. To date Finland, with a population of 5.5 million, has 2,308 cases and 34 deaths.

The free app will log a person’s postcode, age and weight and keep track of any changes in activity and sleep habits, heart rate and body temperature.

The agency expects the extra data will help it map the virus spread and hopes that 10 per cent of the approximately 10 million people in Germany with such devices will sign up.