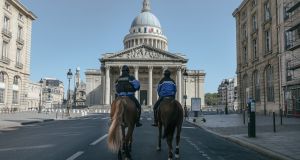 Europe remains the epicentre of the coronavirus pandemic, with more than 700,000 cases and more than 58,000 deaths, the French director general of health, Dr Jérôme Salomon, said on Wednesday.

Italy “is finally experiencing a slow, very slow, regression of the epidemic,” Dr Salomon said, while Germany and the UK were “still in the ascending phase”. Italy has reported the highest number of deaths in Europe, at 17,669.

France has suffered the third-highest death rate in Europe, at 10,869, of whom 541 died in the 24 hours from Tuesday to Wednesday. Dr Salomon said there were 7,148 people in French intensive care units, “an absolute record”. Nearly two-thirds were aged between 60 and 80, but 108 ICU patients were below the age of 30.

The Covid-19 risk assessment for the EU, European Economic Area and UK published by the European Centre for Disease Control and Prevention on Wednesday concluded: “There is currently no indication at EU/EEA level that the peak of the epidemic has been reached.”

The centre also warned: “Based on the available evidence, it is currently too early to start lifting . . . distancing measures in the EU/EEA and the UK.”

French president Emmanuel Macron will make his fourth televised address since the epidemic started at 8pm on Thursday. Mr Macron is expected to extend the lockdown which was supposed to have been lifted on April 15th.

Mr Macron may also address the question of surgical face masks. The French government has been widely criticised for maintaining that only medical workers should wear masks, in the hope of diverting attention from the shortage. The official position changed this week, and citizens are now advised to cover their mouth and nose, with home-made masks if necessary.

Prime minister Edouard Philippe praised the “logistical exploit” and “great success of the hospital system” in coping with the epidemic before the senate on Wednesday. Mr Philippe said he hoped the contagion was reaching a plateau, but it was “not yet time to lift the lockdown, and all our energy must be devoted to making sure the lockdown is respected”.

A slowing in the rate of admissions to ICUs is the only optimistic indicator in France. In the 24 hours from Tuesday to Wednesday, 482 patients were admitted to French ICUs, which are already at maximum capacity, Dr Salomon said.

Since April 1st, 200 patients have been transferred by aircraft or train from Paris to hospitals in Brittany, Normandy and the Loire valley. The regional health agency ARS said further transfers were “very likely”.

The French economy is officially in recession as a result of the epidemic. Economic growth fell 6 per cent in the first quarter, the Banque de France reported on Wednesday. Employment minister Muriel Pénicaud said 586,000 businesses had applied for the government’s part-time employment scheme, reducing working hours for 6.3 million French employees.

About 40 sailors on the French aircraft carrier Charles de Gaulle have been isolated after showing symptoms of Covid-19 infection.  A team of diagnosticians has boarded the vessel, which is heading from the Atlantic ocean to port in Toulon.

The is at least the second case of the epidemic reaching an aircraft carrier. The USS Theodore Roosevelt berthed in Guam after more than 100 sailors tested positive for Covid-19. Capt Brett Crozier was sacked because his unclassified warning to the Pentagon was leaked to the San Francisco Chronicle, the New York Times reported.