Joe Biden’s foreign policy must be underpinned by pragmatism

US Politics: Incoming president needs to avoid moral idealism that has cost the US dearly 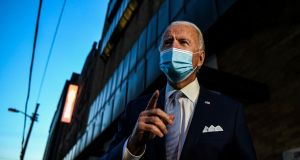 US president-elect Joe Biden: Must be careful not to set moral standards that can only be flunked. Photograph: Chandan Khanna/AFP via Getty Images

Joe Biden is about to stroll through an orchard of low-hanging fruit. Once he is sworn in in January, the next US president will mend relations with Europe and other old but estranged friends. We can expect an equal and opposite distancing from the world’s autocratic regimes. After the strongman-whisperer, Donald Trump, America will have at its top an unambiguous democrat, not just a Democrat.

It is right to wish this project well. It is also natural to worry when the US accords near-mystical powers to democracy. If Biden plans to signal a general preference for free countries over the opposite, so much the better. But there are intimations of a more ambitious idealism.

“Call it a league of democracies,” wrote Antony Blinken last year (with Robert Kagan), proposing a formal concert of liberal nations. So much pamphleteering, maybe, but the man who has been selected as the next secretary of state is not unique among Democrats in this quest to promote freedom after four years of brute nationalism.

Biden must be careful not to set moral standards that can only be flunked. Most of his foreign priorities entail some accommodation with autocrats. The nuclear pact with Iran, which he hopes to revive, does not stipulate any liberal reform within the Islamic republic. And how could it? Nor can a world effort against climate change be fussy about the domestic institutions of participant nations. Carbon emissions are not unique to the democracies.

As for his posture towards China, either Biden will seek a modus vivendi, which would mean holding his tongue about human rights, or he will cultivate those nations that feel unnerved by the Asian superpower. Some of these, but not all, are democracies. To be precious about the internal character of foreign regimes is to curtail US options.

It is a sweet idea that America prevailed in the cold war by corralling the democracies alone. In truth, moral compromises – with Latin American generals, at times with apartheid South Africa – multiplied elsewhere. The US deferred to these and other exigencies even when it accounted for a much larger share of world economic output than it does now. Whether it learns to live with China or strives to counteract it, Washington is going to need a measure of cynicism. Pretending to high-mindedness now assures worldwide disillusion with the US later on.

The nearest that politics has to a law, in the Newtonian sense, is that democracies do not go to war with each other. From peace to active and exclusive collaboration, forswearing grubbier allies, is some leap, though. The 1956 Suez crisis implied, and more recent tiffs between the US and its allies confirm, that having free elections in common is not a strong enough basis for a “league”. The urge to make one, to seek safety in numbers, seems to come from a bleakness about the rise of unfreedom.

Those who measure these things say that democracy is indeed on the wane, both in the number of countries that practise it at all and in its extent within those that do. But it is a decline from a historic high. The post-cold war rate of democratic expansion was always liable to slow and perhaps even reverse. Liberals need not interpret this as a crisis that demands fixing. Or if they do, they must prepare for resistance and perverse consequences along the way.

Looking back, Trump’s courtship of North Korea’s Kim Jong-un stands out for its abjection (and, the ultimate crime for a realist, its lack of results). Undoing the despot-flattery of the past four years is an honourable ambition. Yet it implies going back not to a righteous yesteryear, but to the deceptive pragmatism of the man Biden served as vice-president.

Because he burbled on about the “arc of history” and other teleological fancies, the prudence of Barack Obama gets lost in the record. As well as the Iran deal, he sought to normalise relations with communist Cuba. His vivid spin on the Hippocratic oath (“Don’t do stupid shit”) was realpolitik distilled.

From Vietnam to Iraq, the worst US mishaps abroad, he knew, have not come from self-defence or the honouring of narrow treaty commitments, but from a missionary restlessness. The arsenal of democracy can blow up in the face of its possessor. Even this model of discretion allowed France and Britain to bounce him into intervening in Libya.

As of January, what Henry Kissinger called the “hinge” – America’s indecision between its values and its interests – is Biden’s to fiddle with. The least-worst setting is where his old boss left it. – Copyright The Financial Times Limited 2020