Joe Biden’s relationship with Israel to be tested over Iran 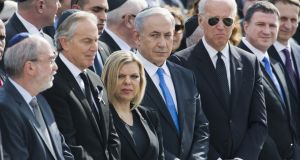 At one particularly strained point in US-Israel relations, Joe Biden publicly insisted the Israeli ambassador to Washington pass on a message: “You better damn well report to Bibi that we’re still buddies.”

The United States president-elect earned a reputation as the humorous mollifier-in-chief of Israeli prime minister Binyamin Netanyahu, or “Bibi”, during the Obama era when the two close allies regularly clashed, particularly when the United States entered talks with Iran, Israel’s chief foe.

“He had the capacity to be very blunt with Bibi,” recalls Dennis Ross, a former Middle East negotiator, adding that the then US vice-president was often called on to smooth things over. “Bibi, I don’t agree with a damn thing you say but I love ya,” Biden quipped in 2014.

The US’s historically strong bipartisan support for Israel was tested during the Obama era. While Netanyahu’s relationship with the last Democratic administration was fractious – the Israeli premier made a searing address to Congress arguing against the 2015 Iran nuclear deal – he also enjoyed a strong rapport with Donald Trump, who delivered huge gains for the Israeli right.

As Biden prepares to take the helm, experts say nothing will strain the president-elect’s 38-year relationship with Netanyahu more than his plan to re-enter the Iran deal that Trump abandoned two years ago.

“As Biden surveys the Middle East, tensions with Iran over the nuclear issue is the only issue that really threatens stability and could produce war,” said Aaron David Miller, another former Middle East negotiator who worked in both Republican and Democrat administrations.

Biden may seek to smooth relations by not pushing too hard on the second area of contention between the two countries – the Palestinian issue, historically the prickliest thorn in US-Israel relations. “I think Biden is aware that . . . if he could only pick one issue to press the Israelis on he would definitely pick Iran [rather than the Palestinian issue]; he’s not going to press Netanyahu on both,” Miller said.

The Trump administration delivered clear wins for Netanyahu on Palestine. Trump reversed decades of US foreign policy orthodoxy when he recognised Jerusalem as Israel’s capital, moving the US embassy there and presented a peace plan that was widely seen as being in Israel’s favour.

Ahead of last year’s elections in Israel, Trump recognised Israeli sovereignty over the Golan Heights – captured from Syria in the 1967 Middle East war and later annexed by Israel in a move unrecognised by the international community. Netanyahu promptly named a settlement after the US president as a thank you.

The incoming Biden administration has indicated it will not seek to relocate the US embassy from Jerusalem or push for a two-state solution in the next four years, arguing the conditions are not ripe for a breakthrough. Biden has also welcomed deals with three Arab countries to normalise relations with Israel, which were brokered by Trump.

This may make it easier for Israel to bear moves from Biden such as ditching Trump’s peace plan, reopening the US consulate in East Jerusalem, seeking to reopen the office for the PLO in Washington that the Trump administration shut and restarting US aid for UN agencies that assist Palestinians.

“For Netanyahu, Trump out of the White House means the end of an era,” said Robert Malley, who was Middle East director at the Obama White House, describing the past four years as a period of “virtually blind endorsement” for the Israeli right’s agenda.

Netanyahu is due to hand over Israel’s premiership next year as part of a power-sharing arrangement with rival-turned-ally Benny Gantz. But if the government collapses over budget disagreements, Israel could face its fourth election in under two years. In such a scenario, Netanyahu will not be able to campaign on his close support from Trump.

The prime minister has already sought to reassure Israelis about the incoming Democratic administration, arguing this week that he has spent almost four decades investing “ceaseless efforts” across the US political spectrum, and pinpointing his “warm relations” with Biden. A Democratic White House could even help Netanyahu keep some of his “more right wing constituents at bay” by arguing that he does not want to risk a negative reaction from the US, Malley said.

But US Democratic presidents have been stung by what they have seen as Netanyahu’s lecturing arrogance before.

After a White House meeting in 1996, Bill Clinton mused aloud in disbelief: “Who’s the f**king superpower here?” Miller, who was in earshot at the time, believes Netanyahu will also “annoy” Biden, but that the incoming US president – who has previously described himself as a Zionist who loves Israel – can plot a route to “managed tensions”.

Ghassan Khatib, a former Palestinian minister and peace negotiator, said the Palestinian leadership had a “feeling of relief” after Biden won the election, but they “don’t expect miracles”.

But while experts said Biden would not call publicly for a settlement freeze as Obama did at the outset of his presidency, Netanyahu would be wise to avoid courting controversy for which the Biden administration would have little bandwidth.

Shira Efron, an Israeli expert at Rand Corporation, said Israel had neglected “even the mainstream Democrats” in the years since the Obama era. “And that’s going to make it harder to get allies in Congress,” she added.

For some Israelis, any Democratic leader would be acceptable so long as it is not Obama. “President Obama put his entire prestige on stopping Israel building in Judea and Samaria,” said Michael Oren, former Israeli ambassador to Washington during the Obama administration, referring to the West Bank by its biblical names.

Biden would not put his prestige on the line to stop Israel from building settlements, he said. “Joe Biden is not an ideologue . . . It’s a policy issue. Okay, that’s a big difference.”