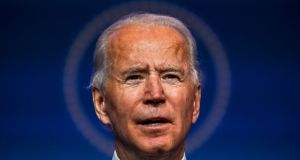 In his first sit-down interview since the election, US president-elect Joe Biden declared his presidency would not be “a third Obama term” and promised to represent the full spectrum of the country and the Democratic party.

Speaking with NBC News’s Lester Holt on Tuesday evening, Mr Biden said the challenges facing him were unique and sought to shake off the shadow of the man who he served as vice-president.

The interview came as Mr Biden announced a slew of cabinet nominees, which included many alumni of the Obama administration.

“What do you say to those who wonder if you’re trying to create a third Obama term?” asked Holt.

“This is not a third Obama term. We face a totally different world than we faced in the Obama-Biden administration,” Mr Biden answered. “President Trump has changed the landscape.”

His administration aimed to represent the “spectrum of the American people as well as the spectrum of the Democratic party” Mr Biden added, agreeing that he’d even consider appointing a Republican who voted for Mr Trump.

“I want this country to be united,” Mr Biden said.

He also said that he wouldn’t “use the justice department as my vehicle” to investigate Donald Trump and his allies, despite pressure from some Democrats to ensure the president’s financial dealings, and allegations that he sought foreign interference in the election, are further investigated. When Mr Trump leaves office in January, he will lose the constitutional protection from prosecution afforded to a sitting president.

But Mr Biden said he’d rather his administration stay out of the fray. “There are a number of investigations that I’ve read about that are at a state level. There’s nothing at all I can or cannot do about that,” Mr Biden said.

Mr Biden expressed his wish to pursue a “progressive” agenda. Asked if he’d consulted with progressive senators Elizabeth Warren and Bernie Sanders on cabinet appointments, the president-elect said “there’s nothing really off the table” when it comes to who he’ll tap to join his administration. But, he said, “taking someone out of the Senate, taking someone out of the House . . . is a really difficult decision that will have to be made”.

Although progressives have lauded Mr Biden’s decision to nominate Janet Yellen for treasury secretary and appoint Ron Klain as chief of staff, prominent leftist voices including representatives Ilhan Omar, Rashida Tlaib and Alexandria Ocasio Cortez have expressed wariness that Mr Biden might pick Bruce Reed, a former Biden chief of staff, to head the Office of Management and Budget (OMB).

“We are extremely concerned by the reports that Reed is a frontrunner to head the Office of Management and Budget (OMB) under the Biden administration, given his history of antipathy towards economic security programs that working people rely on,” the congresswoman said in a petition she co-signed, along with other progressive leaders.

With more administration staff announcements pending, Mr Biden told Holt the team is focused on co-ordinating a transition, noting that the Trump administration’s outreach “has been sincere”.

On Wednesday, Mr Biden will deliver a Thanksgiving address, from Wilmington, Delaware, and will “discuss the shared sacrifices Americans are making this holiday season and say that we can and will get through the current crisis together”, according to the transition team.

It will likely stand in stark contrast to Donald Trump’s turkey pardoning on Wednesday. Mr Trump thanked healthcare workers and celebrated vaccine development advances, but did not offer condolences for the families of the quarter-million who’ve died of the coronavirus.

The president-elect has taken pains to paint himself and his administration as foils to Mr Trump and Mr Trump’s administration. On Tuesday, while the president tweeted, in all caps, “America First”, Mr Biden outlined during a Wilmington press conference his vision for a country “ready to lead the world, not retreat from it”.

He told Holt that he was pleased to have spoken to “over 20 world leaders”, and said, “they are really excited”. – Guardian