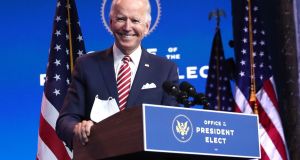 US president-elect Joe Biden: “I am proud to announce additional members of my senior team who will help us build back better than before.” Photograph: Joe Raedle/Getty

President-elect Joe Biden announced a number of senior White House appointments on Tuesday as he continued to prepare for his incoming presidency.

The former US vice-president also spoke with Israeli prime minister Binyamin Netanyahu and president Reuven Rivlin. It comes as president Donald Trump continued to deny the result of the November 3rd election which was won by Mr Biden.

Among those appointed to Mr Biden’s team are campaign manager Jennifer O’Malley Dillon, who will become deputy White House chief of staff, and Louisiana congressman Cedric Richmond, who has been appointed senior adviser to the president and director of the White House office of public engagement. Mr Richmond’s departure from Capitol Hill will open up a special election in Louisiana, but his New Orleans seat is in a safe Democrat district and is expected to remain in Democratic hands. Mr Richmond is the highest-ranking African-American so far to be appointed to Mr Biden’s team. Senior Biden campaign advisers Mike Donilon and Dana Remus have also joined the team, with Mr Remus becoming White House counsel.

Announcing the new appointments, Mr Biden said the team reflects his commitment to “building an administration that looks like America”.  The announcements follow the appointment of Mr Biden’s long-term aide Ron Klain as White House chief of staff.

“I am proud to announce additional members of my senior team who will help us build back better than before,” the president-elect said in a statement. “America faces great challenges, and they bring diverse perspectives and a shared commitment to tackling these challenges and emerging on the other side a stronger, more united nation.”

Though the new appointees will be among the most senior advisers in the West Wing, an announcement on cabinet members is not expected until after Thanksgiving (November 26th).

Mr Trump, who has not taken questions from the press in more than two weeks, remained at the White House on Tuesday, while his campaign team prepared to file another lawsuit in Pennsylvania. So far, none of the Trump campaign’s lawsuits challenging election results in various states have been successful.

Senator Lindsey Graham, who won re-election to his South Carolina senate seat this month, confirmed that he had spoken to election officials in Nevada and Arizona, a day after Georgia’s secretary of state said that the senator had pressurised him to exclude legal ballots from being counted. Mr Graham dismissed those allegations as “ridiculous” on Tuesday though he did confirm that he had approached officials in Arizona and Nevada about verifying mail-in ballots. Georgia is expected to conclude its recount by the end of this week, while the Trump campaign faces a Wednesday evening deadline by which they must request a recount in Wisconsin.

As the fallout from the US election continued, Facebook chief executive Mark Zuckerberg and Twitter founder Jack Dorsey appeared before the senate judiciary committee on Tuesday, amid criticism of the role played by social media platforms in the run-up to the election. Both tech chiefs were grilled by Republicans on their moves to limit distribution of a New York Post article on Hunter Biden’s laptop which was damaging to the former vice-president in the final weeks of the election campaign.

Meanwhile, senator Chuck Grassley announced he was quarantining after exposure to coronavirus. The 87-year-old senator said he was showing no symptoms.

His possible exposure comes after House Speaker Nancy Pelosi was forced to cancel a dinner for incoming members in the US Capitol following outcry on social media about the decision to hold the gathering in the midst of the coronavirus pandemic.

Covid infection rates in the United States are continuing to rise, with 11.2 million cases and more than 247,000 deaths now recorded.