Democrats face disintegration without detested Trump as their glue

US Politics: Biden must hold fractious party together and work for disparate groups 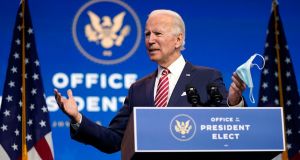 President-elect Joe Biden: The urgency of beating Trump has kept the Democrats’ unstable compound of factions together in recent years. Without him, they are at liberty to squabble. Photograph: Andrew Harnik

My first thought was “only in Washington”. My second was “where can I get one?” As fans of Joe Biden cheered his election win near the White House two weekends ago, a journalist photographed one who was cloaked in a Nato flag. That minatory compass on a blue background would have stood out against the walls of leftist graffiti thereabouts.

Those who treasure the armed alliance were as one with peace-sign daubers against President Donald Trump. So were the cosmopolitan rich and the socialists who would tax them. So were strict liberals and critics of liberalism as a cover for unconscious racism. For four years now, Trump has brought some improbable people together.

Even before his formal departure, his adhesive effect on the US left is weakening. Moderate Democrats blame the party’s mixed congressional results on its off-putting radicals. The accused, congresswoman Alexandria Ocasio-Cortez among them, reply that candidates who stood on “Medicare for All” and other statist policies got elected.

Whoever is right, these recriminations have started even before the realities of presidential power set in: the dashed hopes, the galling trade-offs. Each one has the potential to turn Democrat against Democrat.

A lot has been said about the future of the Republican Party after Trump. But his exit is a no less disruptive event for the Democrats. . A truly cynical Republican would not dispute Trump’s election loss at all, but shoo him out, the better to hasten the coming Democratic feuds.

Biden has to fashion a cabinet, then policies, to please a party that spans Wall Street alumni and avowed socialists. With the Democratic caucus due to shrink in the House of Representatives, the second group, while few in absolute number there, will gain in relative weight. And in assertiveness, too. The left went along with the centrist heresies of the New Democrats in the 1990s because the party had been out of power for so long. Now, just four years since the last Democratic president, there is none of that docility.

Biden can at least console himself that economic policy, his immediate priority, is given to the splitting of differences. Much less negotiable (and fathomable to a man who turns 78 this week) is the clash of underlying values.

If this year has thrown up a lesson beyond the coronavirus pandemic, it is that a – perhaps the – culture war burns within the left, not between left and right. On one side are liberals who define justice as equality before the law. On the other are those who see this republican ideal as a sham, preferring group rights along ethnic and gender lines instead.

Whether or not to “defund the police” is but a detail in this argument over what it means to be progressive. It is roiling the internal politics of newspapers, universities and publishing houses. It threatened to afflict the Democratic Party during the summer of protest. In the end, the mission to defeat Trump helped to preserve discipline. The party cannot count on him beyond January.

Even Biden’s vision of the US in the world is liable to be contested from within. If, by “America is back”, he means a recommitment to the Paris climate accord and the like, he will have his way. But if he envisages a steelier kind of world leadership (Barack Obama, whom he served as vice-president, bombed seven countries in his last years), he can expect to be bucked by a generation of Democrats who have few happy memories of US force abroad.

All successful parties in all democracies are coalitions of a sort. But with its vast population and two-party system, the US takes the concept to an extreme. Some 330 million people have to choose between the Democrats or the Republicans, forcing each to encompass an epic range of views and interests. The Democrats must speak for Oregon, which voted to decriminalise the possession of hard drugs, and for law and order union members in the heartland.

It is too much to suggest they will come to miss president Trump. But there is no dodging the fact that he has done their party management for them for four years, serving as the most effective Democratic whip imaginable. Without him, Biden is left to choose which side of his fractious party to let down.

It has never been clear whether his election spells the restoration of pre-2016 liberalism or an opening for the real left. To see both camps frolic in the capital of late is to sense that one faces grievous disappointment. – Copyright The Financial Times Limited 2020