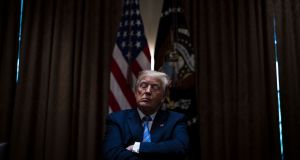 Donald Trump’s narcissistic petulance in continuing to refuse to accept he is a loser is hardly surprising. Trump will leave the White House as he ruled it, with complete disregard for democratic norms or propriety, obsessed with one thing: himself. He brings to mind, as Sarah Lyall in the New York Times put it, the delusional Black Knight in “Monty Python and the Holy Grail” who won’t surrender even after his arms and legs have been hacked off – “Tis but a scratch,” the knight declared.

More than a week after Joe Biden has been declared president-elect, Trump is defying well-established tradition in blocking his successor’s transition preparations, withholding daily intelligence briefings, vital information about the coronavirus pandemic, and access to the machinery of government. Even former aides have balked. Former chief of staff John Kelly calls it “crazy” although those in his immediate entourage cling to denialism. Secretary of state Mike Pompeo promised “a smooth transition to a second Trump administration”.

As the US continues to rack up record numbers of coronavirus cases – more than 1 million more this month – Ron Klain, Biden’s choice as chief of staff, complains, more in hope than expectation, that “there’s a lot of things that are going to have to wait until Joe Biden is president, but this is not one of them”. Yet Dr Anthony Fauci, Trump’s chief pandemic adviser, says the president, who continues to claim the pandemic is receding, has not attended a task force meeting in months.

And the president, presumably from the golf course, is making sure that everyone knows he is still in charge. Last week he purged five top national defence officials at the Pentagon, prompting fears he may be planning some dangerous foreign adventure. The man still has the finger on the proverbial button.

As the economy slides the White House has in the same vein instructed federal agencies to continue preparing the Trump administration’s budget for the next fiscal year – it is due to be presented to Congress in February . “They’re pretending nothing happened,” one official told the Washington Post. “We’re all supposed to pretend this is normal, and do all this work, while we know we’re just going to have to throw it away.”

Democrats are pushing for a broader and more costly package worth more than $2 trillion and Republican lawmakers think the economy needs far less.

After losing re-election in 1873, Texas Governor Edmund Davis refused to leave office, claiming he had several months left in his term, and barricading himself in on the ground floor of the State Capitol. The newly elected governor and his supporters installed themselves on the first floor, using ladders to enter through the windows.

We can only hope it doesn’t come to that again.