US politics: If there is a future for the US right after Trump, it will have to resemble Ike’s benign statism 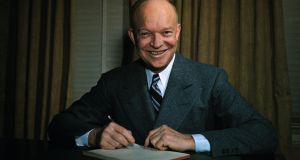 “Their number is negligible and they are stupid,” wrote Dwight D Eisenhower of those conservatives who could not reconcile themselves to the New Deal. They would grow beyond a thoughtless cult to become the organisational and intellectual core of the Republican Party. Photograph: Getty Images

If a man helps to win the greatest war ever fought among our species, some four-lane highways he built later on will tend not to define him. Sure enough, there is no telling from the new Dwight Eisenhower memorial in Washington DC that his was a mostly domestic presidency.

It is the D-Day generalship that is consecrated, not his public works or his entrenchment of the New Deal.

The omission is a shame. If there is a future for the US right after Donald Trump, it will have to resemble Ike’s benign statism. The mistrust of government that has defined the Republicans since the 1980s is a liability in a nation that has grown more collectivist in its views. And this trend in opinion (found in Policy Mood, a polling time series) predates a coronavirus pandemic that has turned yet more citizens into wards of the state. Fiscal relief, the latest tranche of which is being brokered in Congress, is popular to the point of unanimity.

It is customary to divide Republicans into the brave (those who renounce Trump) and the craven (his loyalists). But the first group labours under an illusion of its own. That is, all the party needs is a moral clean-up to be fit for the future. Its ideological estrangement from the voting public is mostly ducked.

The US does not need two parties espousing public largesse, Republicans will object. But the point is not to match Democratic enthusiasm for big government. It might be a start to accept active, well-staffed government, unquestioned in its legitimacy

Even if Trump is re-elected next month, his party has a longer-term problem. A Republican presidential candidate has won the popular vote just once since the end of the cold war (George W Bush in 2004, not coincidentally after he had expanded Medicare). The party has to petition the courts to undo the Affordable Care Act because it cannot sell voters on the idea.

If Republicans keep control of the Senate, they can block the reforms of a president Joe Biden, but only because Wyoming (population 600,000) weighs as much in that chamber as California (40 million).

None of this is illegitimate. The constitution’s counter-majoritarian features are there to be used. But no party can feel entirely relaxed about what is threatening to become a drift into minority status. Its market dogma is a much larger cause of that drift than one demagogic president.

The US does not need two parties espousing public largesse, Republicans will object. But the point is not to match Democratic enthusiasm for big government. It might be a start to accept active, well-staffed government, unquestioned in its legitimacy.

Of this year’s exemplar nations, the successful tamers of the pandemic, some spend less public money as a share of national output than the US. The likes of South Korea do not have monstrous states. But then nor are their technocrats besieged by a governing party.

With his new book , the historian Rick Perlstein concludes his epic chronicle of the modern conservative movement. More than anything, it has been a movement away from Eisenhower. Free-market economics were necessary and popular as his postwar consensus soured in the over-governed 1970s. Whether they answer the public anxieties of the early 21st century is doubtful.

Trump seemed to intuit as much in 2016, before reverting to the three-card trick of tax cuts, deregulation and a crusade against “socialised medicine” that a recent editorial in the Wall Street Journal (that Bolshevik cell) describes as “self-sabotage”.

Republicans seem to mistake the public’s cynicism about “government” in the abstract with indifference to actual services and fiscal transfers. If Biden ends up winning on a plan to enhance both, it might alert them to the scale of their misapprehension.

It had better. The cause of Republican reform will go nowhere until it makes peace with the state. The “Never Trumpers”, the Bush-era alumni who endorse Biden, the Republican donors who fund the other side: there is a nobility to these apostates, but a shallowness of thought, too. Some are sure that, once Trump is out of the way, the party can and should become what it was.

But he broke through for a reason. The Republican platform of 2012 had more to enthuse think-tank supply-siders than middle-income workers. Had Trump governed as paternalistically as he ran four years later, he might still be on course for re-election, however rogue his other conduct.

“Their number is negligible and they are stupid,” wrote Eisenhower of those conservatives who could not reconcile themselves to the New Deal. They would grow beyond a thoughtless cult to become the organisational and intellectual core of the party.

The crisis of Republicanism has its roots in their creed. It outlived its (irrefutable) usefulness a generation ago. Trump is a symptom in comparison and much easier to see off. – Copyright The Financial Times Limited 2020