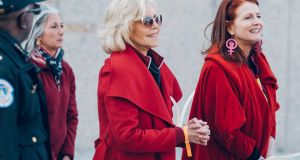 The night before Jane Fonda was arrested in Washington again last week, a member of her social media team asked whether she would consider writing a letter from jail. “With what?” Fonda replied. “I’ll be without my phone.” She paused a beat, “Or adult diapers.”

Also, Fonda continued, musing out loud, it was one thing for the Rev Dr Martin Luther King jnr to write a letter from jail. But her? The plan was nixed.

Fonda, who is 81, moved to Washington in September to highlight the urgency of the climate crisis by staging protests at the Capitol, where, wrapped in a bright red coat, she has been arrested every Friday for the past four weeks, often with a famous friend or two in tow: Sam Waterston, Ted Danson and, on Friday, Catherine Keener and Rosanna Arquette. Fonda plans to keep protesting until mid-January, when production of her Netflix show, Grace and Frankie, resumes, and expects to turn 82 in jail, on December 21st.

“I said to her, ‘Are you really going to make me do this?’” Keener recalled on Thursday night. “She said, ‘I won’t if you don’t want to.’” The next day, Keener, Arquette and Fonda were among the 46 people the police led off in plastic handcuffs for occupying the soaring atrium of the Hart Senate Office Building on Capitol Hill.

Keener and Arquette were fined and released a few hours later, but Fonda, who had a court date because of her prior arrests, spent the night in jail, as expected. “One night, big deal!” Fonda told reporters minutes before the sit-in began.

Fonda is hale, but being arrested at her age brings challenges, like staying balanced with bound hands while clambering into a police wagon. Last week brought a respite of sorts when police led those arrested, whose numbers have tripled since she began protesting, into an easier-to-board short bus with low steps, as onlookers cheered, “Yeah, Jane!”

Upon her release the next day, Fonda told the Washington Post that she had used the coat as a mattress and that her bones hurt.

Celebrity protesters make for soft targets, and Fonda said that there was no question she benefited from her white privilege and fame, but that she was using what she had. She drives an electric car, eschews plastic, eats less red meat and has cut down on air travel – celebrities often opt for private jets, while Fonda said she flies commercial – but said she was protesting out of a need to do more.

“Why be a celebrity if you can’t leverage it for something that is this important?” she said. She hopes to inspire others to flood the streets and compel lawmakers to force fossil fuel companies to keep trillions of dollars of remaining oil reserves in the ground.

Whether this lofty goal is reached, she has at the least made pop culture inroads. Her recent acceptance of a Bafta Award while getting arrested went viral, and Buzzfeed’s suggested Halloween couples costumes included dressing as Fonda and her arresting officer.

Though Fonda has been an activist throughout her life, the only other time she has spent the night in jail was in 1970, when she was 32, on a speaking tour protesting against the Vietnam War. That’s when she was arrested in Cleveland for possession of what Fonda says were vitamins; charges were dropped.

Two years later she visited North Vietnam, landing the nickname Hanoi Jane, and went on to apologise repeatedly for causing any insult to US soldiers. The nickname has stuck, though, and at the protest on Friday at least one detractor, wearing a MAGA hat, repeatedly shouted it her way.

Her demonstrations and arrests now are productions unto themselves. There are speakers and musicians, weekly topics (the ocean, women, militarisation) and, each Thursday night, an hour-long teach-in that is streamed live on Facebook.

The most recent one included Fonda’s close friend, playwright Eve Ensler, and policy strategist Emira Woods, as Arquette and Keener sat cross-legged on the floor. “You look so cute!” Fonda told them. “My fearless leader!” Keener replied.

Fonda had just flown in from a speaking gig in Detroit, where she appeared with Lily Tomlin, her Grace and Frankie co-star, and shortly after the teach-in ended at 8pm, Fonda yelled, “Let’s go to bed!”

The protest and arrest plan began to take shape over Labor Day, when she was holidaying in Big Sur with Keener and Arquette. Fonda had been fighting what she described as deep-seated physical malaise and depression that she ascribed to ever-worsening climate news.

That weekend, she was reading an advance copy of Naomi Klein’s new book, On Fire: The (Burning) Case for a Green New Deal, and it hit her like a lightning bolt. “It was just cooking, cooking, and then she was on the phone,” recalled Keener (who worked with Fonda and Arquette on the 2012 film Peace Love & Misunderstanding).

The plan called for protesters to wear red, and Fonda said her new coat, bought on sale at Neiman Marcus, would be the last item of clothing she would ever buy, because she does not need more stuff.

“I think she took just the right message from the example of the young school strikers,” McKibben wrote in an email. “It’s good that kids are leading, but it’s not O.K. to take the biggest problem on earth and assign it to 15-year-olds.”

There have been hitches. Moving to D.C. meant missing time with her three-month old grandson. And Fonda’s plans to bring along her dog, a 15-year-old Coton de Tulear named Tulea that she describes as her “soul mate,” were scotched after she became too ill to fly.

There was also the matter of Grace and Frankie. Production of the show’s final season is scheduled to begin in January, so Fonda asked Ted Sarandos, the chief content officer of Netflix, if it could be delayed for one year. Sarandos said no. (The exchange was confirmed by Netflix.) Fonda also had several speaking commitments related to the show. “I tried to get out of everything, but I couldn’t because I signed contracts,” she said.

Friday morning dawned bright and cool in Washington, and in a church basement near the supreme court, dozens of Fire Drill Friday protesters gathered to eat pastries, drink coffee and strategise. After finishing an interview with NPR, Fonda, wearing her red coat and a tilted olive fedora, flitted among them like a mother bird, delivering greetings and long hugs. Then they marched toward the Capitol, Fonda leading the way, camera crews and other journalists hustling to keep up.

A stage with a Fire Drill Fridays backdrop was set up on the lawn, and among the hundreds gathered were alumni from Fonda’s high school, the Emma Willard School in Troy, New York; members of Elders Climate Action, and someone dressed in a plush polar bear costume.

Fonda greeted them all, and invited up speakers; among them Keener, Arquette (“Every human life depends on honouring our planet”) and Ensler, who recited a poem about the Earth that left listeners misty-eyed. Then it was off to the Senate building, where, shortly before her arrest, Fonda was asked if her civil disobedience was having its intended effect.

“You are all here,” she said, indicating the swarm of camera crews and journalists. “So I think it’s working.” – New York Times

1 Covid-19: One more death and 174 further cases confirmed in State
2 German nudist chases wild boar that stole laptop at Berlin lake
3 Garda checkpoints in Kildare, Laois and Offaly as restrictions come into force
4 ‘It is soul destroying’: Kildare hotelier on calling guests to cancel
5 Midlands lockdown Q&A: Firstly, is it a lockdown or not?
Real news has value SUBSCRIBE