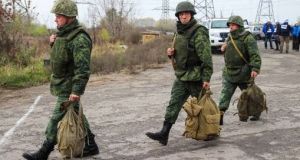 Members of the Luhansk People’s Republic leaving a disengagement area near the town of Zolote in the Luhansk region. Photograph: Alexander Reka\TASS via Getty Images

The next stage of a controversial troop withdrawal in eastern Ukraine is likely to be postponed on Monday, further complicating a bid by the country’s leader to convene a peace summit with his counterparts from Russia, Germany and France.

President Volodymyr Zelenskiy has said Ukraine is fulfilling pre-conditions for the peace talks by pulling back troops from two sectors of the frontline and accepting a plan on how to sequence elections in war-torn areas and grant them special status within Ukraine, which prompted critics to accuse him of “capitulation” to Moscow.

Ukrainian officials confirmed on Saturday that troops and military hardware had been removed from the Zolote area in Luhansk region, a day after Russian-led separatists said they had done the same on the other side of the frontline.

Mr Zelenskiy said the same process would begin in a second area, around Petrivske, on Monday if a ceasefire held there for seven consecutive days.

However, Ukrainian defence minister Andriy Zahorodniuk announced that the area had been shelled in recent days. “There really was shelling, and so we expect the date for the separation [of forces] to be reviewed.”

“We create all of the necessary conditions...Everything depends on the Russian side,” Mr Prystaiko said on Friday.

“Continuing shelling unfortunately indicates that one of the parties does not want this progress because this is the last step before the meeting.”

In militant-controlled Donetsk, meanwhile, an unnamed representative of the separatist forces told Russia’s Ria news agency on Sunday that they were ready to pull back from Petrivske as planned.

Later on Sunday, however, the militants accused Ukrainian nationalists who oppose the troop withdrawal of opening fire near Petrivske.

“The radicals have gone from [staging protests] to practical actions to escalate tension with the aim of disrupting the withdrawal process,” Ria quoted the separatists’ so-called People’s Militia as saying.

Mr Zelenskiy travelled to Zolote last week to reassure locals about their security and urge nationalist volunteer fighters and veterans to end their protests and hand over their weapons, which they reportedly did after his visit.

While Mr Zelenskiy and his new government are keen to make use of their high popularity ratings to end the five-year war quickly, Ukrainian analysts say Russia will drag out the process of peace talks to crank up pressure on the inexperienced president, who was a comedian before claiming a landslide election victory in April.

The two countries are also engaged in tense talks over a new deal on the transit of Russian gas through Ukraine to EU states, with their current contract due to expire at the end of the year.