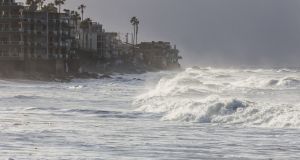 In a worst-case scenario with greater instability of the Antarctic ice sheet, as many as 640 million people could be threatened by 2100, study finds. Photograph: iStock

More than three times more people are at risk from rising sea levels than previously believed, research suggests. Land that is currently home to 300 million people will flood at least once a year by 2050 unless carbon emissions are cut and coastal defences strengthened, says the study, published in Nature Communications. This is far above the previous estimate of 80 million. The upward revision is based on a more sophisticated assessment of the topography of coastlines around the world.

Previous models used satellite data that overestimated the altitude of land due to tall buildings and trees. The new study used artificial intelligence to compensate for such misreadings. Researchers said the magnitude of difference from the previous Nasa study came as a shock. “These assessments show the potential of climate change to reshape cities, economies, coastlines and entire global regions within our lifetimes,” said Scott Kulp, the lead author of the study and a senior scientist at Climate Central.

“As the tideline rises higher than the ground people call home, nations will increasingly confront questions about whether, how much and how long coastal defences can protect them.” The biggest change in estimates was in Asia, which is home to the majority of the world’s population. The numbers at risk of an annual flood by 2050 increased more than eightfold in Bangladesh, sevenfold in India, twelvefold in India and threefold in China. The threat is already being felt in Indonesia, where the government recently announced plans to move the capital city from Jakarta, which is subsiding and increasingly vulnerable to flooding.

The new figures show 23 million people are at risk in Indonesia, up from the previous estimate of 5 million. Benjamin Strauss, Climate Central’s chief scientist and CEO, said more countries may need to follow Indonesia’s lead unless sea defences were strengthened or carbon emissions were cut.

“An incredible, disproportionate amount of human development is on flat, low-lying land near the sea. We are really set up to suffer,” he said. The authors say the calculations could still underestimate the dangers because they are based on standard projections of sea level rise, taking into account moderate emissions cuts in line with the promises made under the Paris agreement. Countries are currently not on course to meet these pledges.

In a worst-case scenario with greater instability of the Antarctic ice sheet, as many as 640 million people could be threatened by 2100, the scientists say. Strauss said a World Bank study using the old elevation data estimated damages of $1tn per year by mid-century, and this would need to be updated. More sophisticated topographical measurements would also be necessary, he said. “The need for coastal defences and higher planning for higher seas is much greater than we thought if we are to avoid economic harm and instability,” said Strauss. “The silver lining to our research: although many more people are threatened than we thought, the benefits of action are greater.” –Guardian