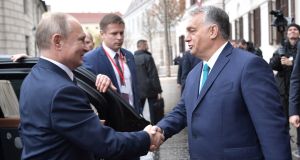 Hungarian prime minister Viktor Orban has rejected criticism over his government’s good relationship with the Kremlin and backed closer co-operation with Russia in areas ranging from energy supply to helping Christians in the Middle East.

After talks with Russian president Vladimir Putin – a frequent visitor to Budapest despite his strained ties with the European Union and Nato – Mr Orban said Hungary sought to “take a step forward every year in political and economic relations” with Moscow.

The two leaders expressed hopes that Hungary could connect “as soon as possible” to the new TurkStream pipeline that will bring Russian gas to central Europe via the Balkans, bypassing Ukraine amid a continuing conflict between Kiev and Moscow.

“Hungary is in the triangle between Moscow, Berlin and Istanbul,” Mr Orban said on Wednesday. “So Hungarian policies are aimed at Hungarian success and good relations with those countries that play a decisive role for us in this region,” he added.

“For us that includes Russia. We are a member of the European Union and Nato, but that does not rule out the opportunity of co-operating with Russia, and we will continue to strive for that.”

Mr Orban also gave indirect support to Russian and Turkish military operations in Syria, which those powers claim are aimed at stabilising the region.

“Hungary has interests in the Middle East, because if there is destabilisation there, lots of migrants will come to Europe and try to cross Hungary. So Hungary is interested in there being political and security stability in the Middle East and Syria.”

The two leaders were due to meet leaders of Christian churches in the Middle East in Budapest on Wednesday evening, and discuss how to assist them.

Mr Orban also defended Hungary’s decision to block a joint Nato declaration this week because it did not include a call for Ukraine to respect the rights of its ethnic Hungarian minority.

Mr Orban also dismissed accusations his policy towards Kiev is coloured by his good relations with Russia, which seized Crimea in 2014 and fomented a war in eastern Ukraine that has killed more than 13,000 and displaced 1.6 million.

Mr Putin said he hoped Ukraine would drop “absurd” legal claims against Russia over previous energy contracts, and insisted Moscow was ready to discuss a new deal to pump gas across the country to EU states and to supply Ukraine with fuel “at a significant discount” to previous prices.

He also declared himself ready for fresh peace talks with the leaders of Ukraine, Germany and France “as long as they have concrete results that lead towards resolution [of the conflict] as a whole”.