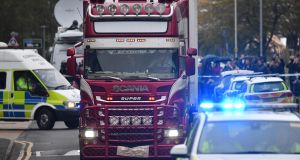 The lorry which towed the trailer in which 39 bodies were discovered in Essex, sparking an international murder investigation. Photograph: Getty

Police in Vietnam have arrested eight people in relation to the discovery of 39 bodies in a truck near London last week, state media said on Monday.

“Based on what we learn from the suspects, we will actively launch investigations to fight and eradicate these rings which bring people illegally to Britain,” said Nghe An province police chief Nguyen Huu Cau, according to the official Vietnam News Agency (VNA).

On Friday, Vietnamese police arrested two people and summoned others for questioning on suspicion of involvement in the incident.

Police in Essex now believe all 39 migrants found dead in the back of a lorry in Essex were from Vietnam.

“We believe the victims are Vietnamese nationals, and we are in contact with the Vietnamese government,” said assistant chief constable Tim Smith on Friday.

The victims’ identities cannot be made public until evidence is collected from a number of countries.

Maurice Robinson (25) from Co Armagh has been charged with 39 counts of manslaughter.

According to lead investigator detective chief inspector Daniel Stoten, officers had spoken by telephone to Ronan Hughes recently but needed to question the brothers in person.

“I want to make a direct appeal,” he said in Belfast yesterday. “Ronan and Christopher, hand yourselves in.” – Additional reporting: Reuters