Democrats in the US House of Representatives have secured enough votes to pass legislation setting up the next steps in the impeachment process involving US president Donald Trump. Video: Reuters 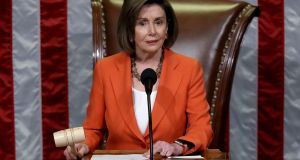 Speaker of the House Nancy Pelosi: ‘What is at stake in all this is nothing less than our democracy’. Photograph: Win McNamee/Getty

US president Donald Trump moved one step closer to impeachment on Thursday as the House of Representatives voted to proceed with the next phase in the inquiry.

The vote clears the way for nationally-televised hearings as soon as this month. It also increases the likelihood that the House will vote to impeach the president, possibly by year-end, though House Speaker Nancy Pelosi said that decision has not yet been made. An impeachment trial would then take place in the Senate, but with Republicans controlling the chamber Mr Trump is unlikely to be convicted.

In highly-charged scenes in the US Capitol, the chamber voted by 232 to 196 to approve a motion to continue the impeachment inquiry opened by House Democrats in September. The resolution also sets out the procedural steps in the next phase of the inquiry, including a provision for public hearings.

Members voted broadly along party lines, with all Republicans opposing the resolution.

Two Democrats – Collin Peterson of Minnesota and Jeff Van Drew of New Jersey – joined Republicans in voting against the motion. Both members represent districts that voted for Mr Trump in 2016.

The vote illustrated the deep divide within the House about impeaching Mr Trump, as the inquiry into how the president tried to persuade the Ukrainian government to investigate his political rival, former vice-president Joe Biden, progresses.

As well as paving the way for public hearings, the vote was the first to be held on impeachment, which forced members to publicly state where they stand on the matter.

The fact that all Republicans opposed the motion will be welcomed by the White House, which had been lobbying Republican members to take a united stance ahead of the vote.

Moments after the result was announced, Mr Trump tweeted: “The Greatest Witch Hunt In American History!”

“What is at stake in all this is nothing less than our democracy,” said House Speaker Nancy Pelosi, who opened the inquiry last month. “I don’t know why Republicans are afraid of the truth. Every member should support the American people hearing the facts for themselves.”

Republicans have denounced the process. Minority whip Steve Scalise accused Democrats of employing “Soviet-style rules.” Holding a poster with a picture of the Kremlin, with the words “37 days of Soviet-style impeachment proceedings,” he said the impeachment inquiry was a “sham” and a “tainted process.”

The resolution backed by members on Thursday sets out the rules and procedures governing the next stage of the impeachment process. Under the procedure endorsed on Thursday, the House Intelligence Committee will conduct open hearings. It will fall to committee chairman Adam Schiff to decide who to call for a public hearing, and it may include witnesses who have already testified privately.

The intelligence committee will then compile a report, which will be passed to the House Judiciary Committee. That committee may then draw up articles of impeachment against the president which would be put to a full vote in the House. While lawyers for Mr Trump will be permitted to take part in the proceedings and call witnesses, House Democrats, who are in the majority, have significant veto power over who appears.