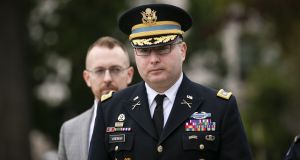 Alexander Vindman listened in to the disputed phone call between Donald Trump and Volodymyr Zelenskiy during which the US president pressed the Ukrainian president to investigate Joe Biden. Photograph: Al Drago/Bloomberg

The top Ukrainian expert in the White House testified on Tuesday as part of the impeachment inquiry, telling lawmakers that he twice raised concerns about President Donald Trump’s Ukraine policy.

Alexander Vindman, a decorated lieutenant colonel and a member of Mr Trump’s National Security Council, is the only witness to date who listened in to the disputed phone call between Mr Trump and Ukrainian president Volodymyr Zelenskiy on July 25th during which the US president pressed Mr Zelenskiy to investigate former vice-president Joe Biden.

Mr Vindman, an Iraq war veteran who defied a White House ban on employees co-operating with the impeachment inquiry, told investigators in his written testimony that he was speaking out of a sense of duty.

“I am a patriot,” he said, according to the written testimony, “and it is my sacred duty and honour to advance and defend our country irrespective of party or politics.”

Ahead of his appearance Mr Trump hit out at Mr Vindman, who was born in Ukraine but moved to the US with his family at the age of three, blasting him as a “never Trumper”.

“Supposedly, according to the Corrupt Media, the Ukraine call ‘concerned’ today’s Never Trumper witness,” he tweeted. “Was he on the same call that I was? Can’t be possible! Please ask him to read the Transcript of the call. Witch Hunt!”

Mr Vindman told investigators that his concerns about improper conduct arose at a July 10th meeting between Ukrainian and US officials. He said that US ambassador to the European Union Gordon Sondland told the Ukrainian representatives that they should undertake specific investigations in order to secure a meeting with the president.

“I stated to Amb Sondland that his statements were inappropriate, that the request to investigate Biden and his son had nothing to do with national security,” Mr Vindman said in his written testimony. He then reported his concerns to lawyers for the National Security Council, making a second complaint after the July 25th phone call.

As Mr Vindman testified behind closed doors in the US Capitol, Democrats on Tuesday unveiled details of the resolution which will be put to a full vote of the House of Representatives on Thursday.

House speaker Nancy Pelosi announced earlier this week that she would be holding a vote on the processes around the impeachment inquiry following criticisms from Republicans that the interviews were taking place in private, and no full vote of the House had been held.

Thursday’s vote will not be a full impeachment vote, but rather a vote on how to proceed with the inquiry. The resolution will require the House intelligence committee to conduct open hearings, compile a report, and then pass this report to the House judiciary committee.

That committee would then draw up articles of impeachment against the president which may be put to a full vote in the House.