Analysis: All sides in UK election have reasons to fear voters 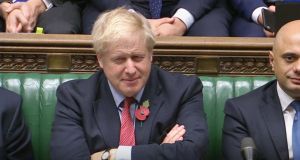 Tuesday night’s overwhelming vote in favour of a December election, by a margin of 438 to 20, concealed the anxiety gnawing at MPs on both sides of the House of Commons.

The vote gave Boris Johnson the date he was looking for and there were no amendments to expand the franchise to include EU nationals or 16- and 17-year-olds. But the prime minister is facing the voters with Brexit still not delivered and his pledge to leave the EU by October 31st in shreds.

Some Conservative MPs fear their constituents will punish them for spending five weeks campaigning rather than scrutinising and passing the withdrawal agreement Bill. And all Conservatives are conscious of the electoral mountain they must climb to return to power.

More than 30 seats short of a working majority of 320 as they go into the campaign, the Conservatives expect to lose seats to the Scottish National Party (SNP) in Scotland and to the Liberal Democrats in the southeast and southwest of England. At odds with the DUP over the Brexit deal and with no other potential coalition parties, the Conservatives will need to win a majority if they are to form the next government.

Corbyn’s allies draw comfort from the outcome in 2017, which saw Labour draw almost level with the Conservatives with 40 per cent of the vote. And Labour has more coalition options than the Conservatives, so it does not need a majority or even to emerge as the biggest party to have a chance of forming the government.

On the other hand Corbyn is by far the most unpopular of the party leaders and the Conservatives are targeting Labour-held seats that voted Leave in 2016, particularly in the midlands and northeast England, and in Wales.

Former Labour frontbencher Chuka Umunna is the Liberal Democrat candidate in Cities of London and Westminster, a Conservative-held marginal where Labour came second in 2017. Former Conservative minister Sam Gyimah is contesting Kensington, which Labour won from the Conservatives in 2017 with a majority of just 20 votes.

Luciana Berger, who left Labour after she faced anti-Semitic abuse, is the Liberal Democrat candidate in Finchley and Golders Green, a constituency with a big Jewish population that Labour came close to winning from the Conservatives in 2017.

The SNP is confident of winning seats in Scotland from the Conservatives, Labour and possibly the Liberal Democrats. And they will be happy to go to the polls ahead of the trial next year of former leader Alex Salmond on charges of sexual assault.