‘I know no one here anymore’: The long goodbye to East Berlin

Jalda Rebling witnessed history but, as Germany marks fall of the wall, she will be gone 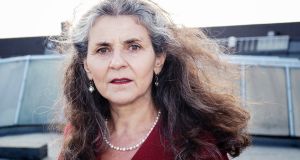 Jalda Rebling, a synagogue cantor and well-known Yiddish musician, has been packing her old life in Berlin into cardboard boxes. Photograph: Manuel MIethe

In a corner apartment, two floors up, Jalda Rebling has spend two days packing her old life into cardboard boxes. Her gaze is tired but her mind is far from bored as she discovers clues to a vanished life: a blue binder reading “East German Artistic Association”; an old water glass bearing the Aeroflot logo.

Three decades ago here, Jalda was eyewitness to history. The red-brick Gethsemane Church opposite was the backdrop of citizen protest in Berlin that toppled the hated wall. But by next Saturday, when Germany marks its peaceful revolution of 1989, she will be gone.

“I know no one here anymore,” says Jalda, a synagogue cantor and well-known Yiddish musician, like her parents before her. Her mother, singer Lin Jaldati, survived the Shoah.

Gethsemane Church threw open its doors day and night in early October for a vigil beneath a banner, “Wachet und betet” (remain vigilant and pray)

In the 1980s, Jalda’s neighbourhood of Prenzlauer Berg was a hotbed of East German dissidents, critical artists and other exotic creatures. Jalda remembers exhibitions, readings and discussions in private apartments. There was plenty of time and little pressure given the socialist state ensured the basics of life were affordable – job, rent, food.

“The price for that, though, was a narrowness in society that left me struggling to breathe,” she remembers.

By late 1989, demands for social change and free elections were building. Not even the Stasi secret police officers loitering outside her door at all hours could keep Jalda and her neighbours out of the Gethsemane Church, a rare sanctuary for open debate in East Germany.

The people gathered there – first afraid, then slowly more confident – knew things had to change. But no one was ready for the speed – or the drama – of the change that eventually came.

Jalda insists November 9th, the day the wall finally fell, was merely the end point of 1989. October was the crucial turning point, as citizens across the country united in opposition just as official East Germany geared up to mark its 40th anniversary.

Gethsemane Church threw open its doors day and night in early October for a vigil beneath a banner, “Wachet und betet” (remain vigilant and pray). At night the church grounds – and apartment windows in the square – came alive with candles. Their light was neutral but it sent a clear political message.

On October 7th, with Soviet leader Mikhail Gorbachev in town for the official anniversary events, East German police and Stasi intelligence officers moved into Prenzlauer Berg to rough up the opposition and break up their demonstrations.

Jalda was caught up in the ensuing riot and saw a friend knocked down by a police truck. Later, she heard how a nearby school had been requisitioned by soldiers, waiting in the dark with their weapons. More than 1,000 people were wounded or arrested that night – but a military deployment order could have made things much, much worse.

As October became November, people power, economic bankruptcy and the withdrawal of political support from Moscow had hollowed out the East German regime’s repressive power.

And on November 4th, Jalda and her sons joined nearly a million others down the hill on Alexanderplatz for the largest demonstration East Germany would ever see.

Her excitement turned to fear when, among the proud cheers of “We are the people”, the 1989 chorus, she heard the first barks of “Germany for the Germans”.

“I had a panic attack and had to go home,” says Jalda. Even today she is unsure if it was Stasi provocation – or Germany’s extreme nationalist genie, an ideology that once tried to kill her mother, being released again from its bottle.

From then on she lost her enthusiasm for the transition to German unification in October 1990, preceded three months earlier by the Deutschmark’s introduction in East Germany.

'The time in between, the early 1990s, were a remarkably free time here, where people just moved into empty buildings and set up bars, galleries, clubs'

For her son, taking up the dinner table narrative, the currency transition of July 1990 was a time of wonder when, overnight, their drab stores filled up with exotic foods.

“We gorged ourselves on ice cream,” says Tobias. His older brother, Jakob, adds: “A one litre tub each, and that every day.”

East Germany’s embrace of market capitalism was soon felt in Prenzlauer Berg, with rapid renovation of its century-old housing stock. After the builders came a swarm of sociologists, fascinated by the rapid gentrification and replacement of more than 90 per cent of the original population.

Safe inside their roomy apartment with its old, East German lease, Jalda and her artist partner Anna felt insulated from the first wave of the free market.

Then the euro crisis brought a second wave of property investors on another buying spree. Jalda’s remaining neighbours began to vanish, the Jewish theatre where she performed became a bag shop, the rent in Anna’s atelier was doubled, the familiar was gone.

“Of course there was always going to be a generation shift, but this . . . ,” says Jalda, her voice fading out.

The couple have found a new home just outside Berlin, though their work in the city means they will keep a room in the apartment. But now Gethsemane Strasse is home to her youngest son, Joseph.

At 29, he is as old the new Germany and listens closely to tales of the country he never knew.

“It’s a funny situation, hearing of one country going and another one coming, trying to find its feet,” he says.

It’s dark now around Gethsemane Church. All parking is forbidden – except for the television transmission trucks there to broadcast an anniversary ceremony later this week.

“This official remembrance stuff has nothing to do with any of us,” says Jalda, hoping her movers will be allowed park their truck outside her apartment on Monday.

The last box packed, she’s less bitter and more resigned to this last lesson in the new reality.

Like millions of East Germans 30 years ago, she had to relearn everything: how to live, how to love, how to master her new life. She succeeded. And while she doesn’t miss East Germany, she’s ambivalent about today’s Germany, too

“The time in between, the early 1990s, were a remarkably free time here, where people just moved into empty buildings and set up bars, galleries, clubs,” she said. “I experienced all of that and I’m so glad I did. It was the time of my life.”