US election 2020: Beto O’Rourke drops out of race 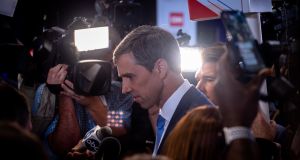 Beto O’Rourke has dropped out of the race to become the Democratic presidential nominee. Photograph: Hilary Swift/The New York Times

Beto O’Rourke has dropped out of the 2020 presidential race, as the field of potential Democratic candidates to take on Donald Trump in next year’s presidential election narrows.

The former congressman from Texas has been seen as one of the rising stars of the party, following an impressive senate campaign against Republican Ted Cruz during last year’s mid-term elections.

The El Paso native ultimately failed to dislodge Mr Cruz in the senate race, but soon announced his intention to contest the Democratic primary race for president.

But despite a strong fundraising start, he had struggled to stand out in a crowded Democratic field, failing to get beyond single digits in opinion polls.

In a statement released on Friday evening he said it was in the best interests of the campaign, the country, and the Democratic party “as we seek to unify around a nominee”.

“Though it is difficult to accept, it is clear to me now that this campaign does not have the means to move forward successfully.”

Mr O’Rourke gained national attention this year following a mass shooting in his home town of El Paso, which prompted him to make gun control one of the central issues of his campaign. During the last Democratic debate in Houston he talked about a gun buy-back proposal, but opponents raised scepticism about how it would work in practice.

Travelling to Mississippi for a campaign rally, US president Donald Trump tweeted: “Oh no, Beto just dropped out of race for President despite him saying he was “born for this.” I don’t think so!”

Mr Trump was referring to an article in Vanity Fair magazine earlier this year in which 47 year-old O’Rourke was quoted as saying he was “born” to run for president.

A record number of candidates are competing to become the Democratic nominee for president. A New York Times poll on Friday put Senator Elizabeth Warren ahead in the early-voting state of Iowa at 22 per cent, with former vice-president Joe Biden slipping to fourth place at 17 per cent. Former candidate Bernie Sanders polled in second place at 19 per cent, followed by South Bend mayor Pete Buttigieg in third place at 18 per cent.

Ms Warren on Friday proposed a $20.5 trillion Medicare for All plan that she said would not require raising middle-class taxes “one penny”, answering critics who had attacked her for failing to explain how she would pay for the sweeping healthcare overhaul.

I am grateful to all the people who made up the heart and soul of this campaign. You were among the hundreds of thousands who made a donation, signed up to volunteer or spread the word about this campaign and our opportunity to help decide the election of our lifetime.

Ms Warren’s plan would save American households $11 trillion in out-of-pocket healthcare spending over the next decade, she said, while imposing significant new taxes on corporations and the wealthy to help finance it.

The proposal to remake the US healthcare system will face scrutiny from her more moderate Democratic opponents, who have questioned Medicare for All’s practicality.

“Healthcare is a human right and we need a system that reflects our values,” wrote Ms Warren in a 20-page essay outlining her plan. “That system is Medicare for All.”

Medicare for All would replace private health insurance, including employer-sponsored plans, with full government-sponsored coverage, and individuals would no longer have to pay premiums, deductibles, co-pays or other out-of-pocket costs.

It would extend Medicare, the US government’s health insurance programme for people 65 years and older and the disabled, to cover all Americans, including the roughly 27.5 million – 8.5 per cent of the population – who are uninsured.

Ms Warren, a former law professor, has become known for a bevy of detailed policy proposals. But she had faced criticism for not detailing how she would pay for a Medicare for All plan she backs, which was introduced in the Senate by rival Mr Sanders.

At recent debates, she had refused to answer directly when asked whether she would be forced to raise middle-class taxes to cover the costs, even as Sanders acknowledged he would.

More moderate 2020 candidates such as Mr Biden have said Medicare for All would be too disruptive and favour a more incremental approach.

On Friday, Mr Biden’s campaign questioned Ms Warren’s calculations, calling them “double talk” and “mathematical gymnastics” and asserting that middle-class taxes would rise despite her vow.

“It’s impossible to pay for Medicare for All without middle-class tax increases,” said Kate Bedingfield, Mr Biden’s deputy campaign manager. “To accomplish this sleight of hand, her proposal dramatically understates its cost, overstates its savings, inflates the revenue, and pretends that an employer payroll tax increase is something else.”

Ms Warren on Friday said she was “just not sure where he [Biden] is going”, adding that her proposal and its costs were “authenticated” by outside experts.

“Democrats are not going to win by repeating Republican talking points and by dusting off the points of view of the giant drug companies and the giant insurance companies,” she said.

House of Representatives speaker Nancy Pelosi also questioned the feasibility of enacting Medicare for All in an interview with Bloomberg on Friday, saying Democrats should focus on expanding the Affordable Care Act, commonly known as Obamacare.

Critics like Ms Warren note that the current US healthcare system is the most expensive in the world despite leaving tens of millions uncovered. It is a patchwork of private insurance often provided by employers or obtained through Obamacare marketplaces and public programmes covering the poor, elderly and disabled .

Medicare for All legislation stands little chance of passing Congress, where Democrats control the House and Republicans control the Senate.

“She makes some assumptions about how effectively healthcare costs could be contained that may not pan out,” said Larry Levitt, a health policy expert at the Kaiser Family Foundation.

Ms Warren’s plan also calls for cuts in defence spending and passing immigration reform to increase tax revenue from newly legal Americans, two steps that would face an uphill battle in Congress. The $20.5 trillion in new spending over 10 years would increase the entire federal budget by a third.

Ms Warren said she would finance the plan largely through money from businesses and the wealthy. Employers would be asked to repurpose the money they spend on workers’ healthcare to Medicare contributions, while billionaires, high-earning investors and corporations would face trillions of dollars in higher taxes.

She released two letters supporting her calculations from several experts, including Simon Johnson, the former chief economist for the International Monetary Fund, Donald Berwick, who oversaw Medicare in the Obama administration and Mark Zandi, chief economist at Moody’s Analytics.

An online calculator launched by Ms Warren’s campaign showed an average family of four with employer-provided insurance would save $12,378 per year.

Ms Warren said with her Medicare for All plan in place, projected total healthcare costs in the United States over 10 years would be just under $52 trillion – slightly less than maintaining the current system.– Additional reporting: Reuters