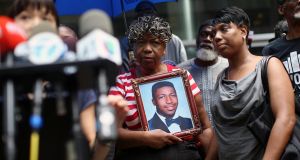 The disciplinary trial of the New York City police officer, who put Eric Garner, an unarmed black man, in a chokehold which contributed to his death, began on Monday, nearly five years after widely seen video of the incident sparked a national outcry about policing tactics.

Daniel Pantaleo, who is white, could be fired after the conclusion of what is expected to be a 10-day trial at the New York Police Department’s headquarters in Manhattan. The ultimate decision will rest with New York City Police Commissioner James O’Neill.

Videos recorded on bystanders’ cellphones showed Garner, who was 43, saying “I can’t breathe” 11 times before he died. The phrase became a rallying cry in the early days of the Black Lives Matter movement, which seeks to end the disproportionate use of deadly force against non-white people by US police departments.

“His last words ‘I can’t breathe’ tell you who caused his death,” Jonathan Fogel, a lawyer for the Civilian Complaint Review Board, said during opening statements. “He gave his victim a death sentence over loose cigarettes because he disregarded his training.”

The trial will be closely watched by civil rights activists who say too few police officers face consequences for using deadly force and those, including New York City’s powerful police officers’ union, who defend officers for doing a dangerous job.

Mr Pantaleo, 33, has been assigned to a desk job since the deadly encounter on a sidewalk in the borough of Staten Island in 2014, when he and other officers tried to arrest Garner on suspicion of selling loose cigarettes.

“The evidence will show that the ultimate autopsy was wrong,” said Mr Pantaleo’s lawyer Stuart London, who ripped up the autopsy report in the courtroom during his opening statement.

“Officer Pantaleo was justified in using physical force to make this arrest,” he added, arguing that Mr Pantaleo did not cause Garner’s death.

Mr London said Mr Pantaleo did not using a chokehold, but rather a “seat belt” manoeuvre that goes around the torso which slipped into a neck hold because of Garner’s size. Garner was considered medically obese at 181 kg (28st 5lbs).

New York City’s chief medical examiner ruled that Garner was killed in part by a chokehold compressing his neck.

A Staten Island grand jury declined to bring criminal charges against Mr Pantaleo later in 2014, prompting the US department of justice to open a civil rights investigation into the death. Garner’s family has criticised that investigation as it has stretched into its fourth year without resolution.