Saudis claim some rebels remain behind in coast guard uniforms 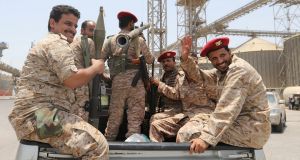 The withdrawal of rebel Houthi forces from Yemen’s three Red Sea ports is proceeding according to plan despite Saudi-backed government accusations that rebels remain in coast guard uniforms, the UN has said.

“All three ports were monitored simultaneously by UN teams as the military forces left the ports and the coast guard took over responsibility for security,” said Lieut Gen Michael Lollesgaard, head of the UN redeployment committee.

Yemeni government spokesman Muammar al-Iriani disputed his assessment, and accused the Houthi militia of engaging in “a theatrical performance of handing over control of the port to its own forces”.

According to the detailed plan for redeployment agreed in mid-April, the Houthis, who enjoy marginal support from Iran, are obliged to hand over to “local forces” operating alongside UN monitors.

Fearing pro-government fighters would move into the port following their withdrawal, the Houthis seem to have pre-empted such a move by installing a small contingent of loyalist local coast guards who do not replicate the large scale deployment of seasoned Houthi fighters who have held the three ports since 2014.

The Houthis began their pull-out on Saturday from Hodeidah, the entry point for 70 per cent of Yemeni imports, and the small ports of Saleef and Ras Issa, which handle oil and grain. If the evacuation goes smoothly the handover should be completed on Tuesday and the UN will begin removing military posts and equipment and demining the area.

The next phase of the UN plan involves a pull-back by both Houthi and pro-government forces from Hodeidah city and the surrounding province, and the opening of the coastal road between Hodeidah and the Houthi-held capital, Sana’a.

Once Hodeidah port operates normally, the World Food Programme and other humanitarian agencies will be able to deliver aid for more than 10 million of Yemen’s 28 million people who face starvation and disease if relief deliveries are delayed.

The UN Development Programme has predicted that if the war in Yemen, launched by the Western-backed Saudis and Emiratis in March 2015, ends this year, 233,000 Yemenis will have died from violence, deprivation and disease.

The war has reached stalemate, with the Houthis holding populous northern areas and the government southern regions. While the US, Britain and France have been sharply criticised for arming the Saudi-led coalition, relations between the Saudis and their Emirati allies have soured due to conflicting aims.

Riyadh seeks to reunite Yemen under interim president Abd-Rabbu Mansour Hadi, who was driven into exile by the Houthis in 2015 after his term expired. Abu Dhabi supports southern separatists and has seized strategic ports on the Gulf of Aden.

Following a Houthi amnesty for Yemenis recruited by the government, a number of tribesmen have defected to the rebels, who argue that impoverished countrymen are fighting against their country for money, common behaviour in civil conflicts in Syria and Iraq as well as Yemen.

In a bid to rally popular support, the Houthis have launched an ambitious programme for Yemeni reconstruction, reconciliation, democracy and recovery of its independence and national sovereignty by 2030.