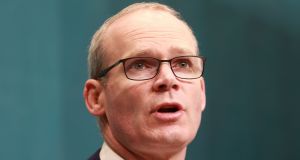 British politicians should not imagine that a change of prime minister will resolve the Brexit deadlock, Simon Coveney warned in Brussels on Monday.

“The issues don’t change and the arithmetic at Westminster doesn’t change so for us this isn’t about personalities,” the Tánaiste told journalists on his way out of a foreign ministers’ meeting. “It’s about facts and the complexities of Brexit and trying to protect EU interests and Irish interests and also to respect and accept UK interests as well in all of this.”

The central problem, he said, was an unwillingness of some on the British side to accept the idea of compromise. “The UK needs to make its mind up now as to how it approaches the Brexit process,” he said.

He would not be drawn on his attitude to a second referendum or “confirmatory vote” in the UK. “I’ve been very careful in recent weeks not to prescribe a way forward. The British political system has to,” Mr Coveney said.

“And what dington on the other side, are trying to achieve is a middle ground position that can get majority support in the Labour Party and in the Conservative Party to command a majority in Westminster and that is what we would like to see happen .”

In the UK, he said “the two main parties left it until very late in this process to talk seriously to each other. They are now though, and so we want to see that process produce some certainty because in the absence of agreement between the Labour Party and the Conservative Party on a way forward, it’s anybody’s guess as to where the Brexit debate in Britain goes after that.”