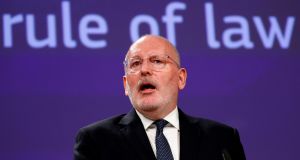 Unless it mends its ways, Romania is set to become the third EU member state, alongside Hungary and Poland, to face disciplinary proceedings for breaches of EU rule-of-law standards, the European Commission has warned it.

Failure by Bucharest to remediate serious deficiencies in its legal system, which threaten the independence of judges and provide virtual impunity for corrupt practices, will see the commission launch article 7 proceedings against it urgently, vice-president Franz Timmermans warns in a letter sent to Romania on Friday.

“In addition,” the letter warns, “the commission reserves its powers as guardian of the treaties and will not hesitate to swiftly open proceedings” in the European Court of Justice “against any related infringement of [EU] law it may identify”.

Although the decision to send the letter was taken by the commission last month, Mr Timmermans waited until Friday, after the Sibiu EU summit, to spare the blushes of its hosts, the Romanian presidency. He says the letter’s purpose is not to initiate article 7 proceedings but to open a discussion with Bucharest on how it can conform.

In theory, at the end of the article 7 process, fellow member states could remove voting rights from a state implicated in serious breaches of the rule of law, but the unanimity requirement means in practice such an outcome is most unlikely. Hungary and Poland, which are both currently in the process, have promised to protect each other’s backs.

But the repeated article 7 hearings in the Council of Ministers are politically deeply embarrassing, and the quite separate rulings by the European Court of Justice are mandatory.

Concerns about the independence of the Romanian justice system since the country’s 2007 EU accession led the EU to require the establishment of a Co-operation and Verification Mechanism to monitor progress in justice reform and in the fight against corruption and organised crime.

While politicians in Bucharest have been asking over the past two years for the abolition of the mechanism, the commission stressed in its latest mechanism report that Romania actually made steps backwards in addressing the mechanism’s recommendations and it added new ones.

“There has been similar unwillingness to address the recommendations made by the Venice Commission and the Council of Europe’s Group of States Against Corruption,” the Timmermans letter says.

The new disciplinary system for magistrates, the letter argues, will have “a chilling effect on magistrates when it comes to exercising their independence”. And it expresses concerns about the apparent refusal of other arms of the state to co-operate with the courts.

The revision of sentencing guidelines “means many crimes can end unpunished, including crimes [such as counterfeiting currency, market abuse or child pornography] which according to EU law should be punishable by effective, proportionate and dissuasive criminal sanctions .”

And the requirement that proof of direct intention for certain crimes “must be evident beyond all doubt ... might affect the fight against serious crimes and can lead to impunity”.

“The use of ... emergency ordinances in situations where it is far from obvious that there effectively is an ‘emergency’ ... including through the use of emergency procedures in parliament – also create further risks to the rule of law,” the commission says.

“If further negative steps are taken, such as promulgation of the latest amendments to the criminal codes, the commission will trigger the [article 7] rule of law framework without delay,” the letter says.