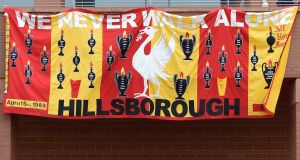 The Hillsborough memorial at Anfield in Liverpool on April 15th, 2019, where fans of the club commemorated the 30th anniversary of the Hillsborough disaster in which 96 Liverpool football fans were killed. Photograph: Paul Ellis/AFP/Getty Images)

Graham Mackrell, the secretary of Sheffield Wednesday football club when 96 people were killed at its Hillsborough stadium on April 15th, 1989, has been fined £6,500 (€7,500) following his criminal conviction for operating dangerous turnstile arrangements that day.

Mackrell, 69, was found guilty on April 3rd of failing in his official duties as the stadium’s safety officer to ensure there were adequate turnstiles for the thousands of people with tickets to support Liverpool in the FA Cup semi-final against Nottingham Forest.

Sir Peter Openshaw, the judge who heard the trial at Preston crown court, allowed Mackrell to remain seated in the well of the court with his lawyers, rather than be in the dock, when sentence was passed.

Openshaw said that when setting the level of the fine, he was taking into account Mackrell’s good character, the view of South Yorkshire police officers at the time that he was a “diligent” safety officer and the view that Hillsborough was safe, and that Mackrell had suffered “vilification” and “vituperation” on social media.

Mackrell was found guilty of providing dangerously few turnstiles for Liverpool supporters at the Leppings Lane end of the ground, with only seven allocated for all 10,100 people with tickets to stand. Severe congestion built up at the turnstiles “certainly from 2:25pm”, according to Openshaw, then at 2:52pm the police officer in command of the semi-final, ex Ch Supt David Duckenfield, ordered wide exit gates to be opened to allow large numbers of people into the ground.

A tunnel leading to the terrace’s central “pens” was not closed off and a lethal crush developed minutes later, killing 96 people, aged between 10 and 67, and injuring hundreds more.

The Crown Prosecution Service is seeking a retrial of the charge of manslaughter against Duckenfield, for causing the deaths by gross negligence, after the jury at his joint trial with Mackrell, where he pleaded not guilty, was unable to reach a verdict. Richard Matthews QC, for the CPS, stressed that Mackrell was not found guilty of causing or directly contributing to the deaths of the 96 people.

Mackrell’s defence barrister, Jason Beer QC, told Openshaw that Mackrell, a qualified accountant who has worked in football for 45 years, had only £5,000 in savings, or “realisable capital”, as Openshaw described it.

At the League Managers Association, where Mackrell has worked since 2009, his net weekly wage is £700, Openshaw said, and he has pensions paying £670 a week.

Applying for Mackrell to contribute to the prosecution costs, Matthews said £10,000 was attributable to the case against Mackrell. Beer asked for a “substantial discount” to that, particularly given Mackrell’s means, and Openshaw ordered him to pay £5,000.

Bereaved family members reacted with dismay to the level of the fine. Louise Brookes, whose brother Andrew was 26 at the time he was killed in the disaster, calculated in court that the fine was £67.70 when divided by 96, and described it as “disgusting”.

Margaret Aspinall, the chair of the Hillsborough Family Support Group, whose 18-year-old son, James, was killed in the lethal crush, said: “Ninety-six innocent people lost their lives. Graham Mackrell was the safety officer responsible for the dangerous turnstile arrangements at that ground, yet he kept his job afterwards, his pension, and now he’s found guilty and got this little fine. What an insult to the 96 who died, and to us.”

The charge was brought under the 1974 Health and Safety at Work Act, which now carries a possible prison sentence but in 1989 breaches were punishable only with a fine. The CPS originally charged Mackrell with two other offences that carried possible prison sentences, for alleged breaches of the Safety of Sports Grounds Act 1975, but both were dropped before the conclusion of the 10-week trial.

Mackrell is the first person to be found guilty of any criminal offence relating to the Hillsborough disaster, 30 years on. He issued a statement after his sentence, noting Openshaw’s confirmation that his offence did not directly contribute to people’s deaths or injuries.

“Despite that, I do wish to take this opportunity to make clear my sympathy to all those impacted by this appalling tragedy,” his statement added. – Guardian