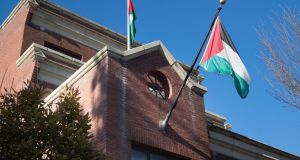 The Palestine Liberation Organisation office in Washington. The mission opened in the US capital in 1994. Photograph: Michael Reynolds/EPA

The Trump administration is to close the Palestinian Liberation Organisation (PLO) office in Washington DC in a move likely to inflame tensions in the Middle East.

The US state department said the PLO had “not taken steps to advance the start of direct and meaningful negotiations with Israel”.

“To the contrary, PLO leadership has condemned a US peace plan they have not yet seen and refused to engage with the US government with respect to peace efforts and otherwise,” a statement noted. “As such, and reflecting congressional concerns, the administration has decided that the PLO office in Washington will close at this point.”

The PLO’s mission in Washington DC – effectively the diplomatic representation of the Palestinian people – opened in 1994. Saeb Erekat, secretary general of the PLO, described the move as a “dangerous escalation”. He said the decision shows that the United States is “willing to disband the international system in order to protect Israeli crimes and attacks against the land and people of Palestine as well as against peace and security in the rest of our region”.

The state department also cited US concerns about “Palestinian attempts to prompt an investigation of Israel by the International Criminal Court [ICC]”. The US warned Palestinian leaders last year that it would close the mission if the PLO pressured the court to investigate Israel.

Confirmation of the closure emerged minutes before national security adviser John Bolton delivered a blistering denunciation of the International Criminal Court in a speech in Washington. Mr Bolton denounced the court, which was established in 2002, as “ineffective, unaccountable and indeed outright dangerous”.

In particular, Mr Bolton cited the court’s position on Israel, noting that the ICC has “threatened Israel – a liberal, democratic nation – with investigation into its actions to defend citizens from terrorist attacks in the West Bank and Gaza”.

“There has also been a suggestion that the ICC will investigate Israeli construction of housing projects on the West Bank,” he said in a speech to the Federalist Society. “The United States will always stand with our friend and ally, Israel.”

The United States and Israel are among seven countries that did not ratify the court’s founding treaty. More than 100 states, including Ireland, have ratified the pact. The court prosecutes individuals accused of genocide, war crimes and crimes against humanity.

Monday’s announcement comes less than two weeks after the US announced it would stop funding a UN agency that provides assistance to Palestinians across the Middle East. President Donald Trump also dismayed Palestinians by moving the US embassy from Tel Aviv to Jerusalem.

Senior members of his administration, including his daughter Ivanka and her husband Jared Kushner, attended a ceremony in Jerusalem in May to mark the opening of the embassy. The unveiling was marred by violent clashes, as dozens of Palestinians were killed by Israeli forces along Israel’s border with Gaza.

In his speech on Monday – his first major speech since his appointment as national security adviser – Mr Bolton said that during the George W Bush administration he was “honoured to lead US efforts internationally to protect Americans from the court’s unacceptable overreach, starting with un-signing the Rome Statute”.

Noting the court’s efforts last year to seek authorisation to investigate alleged war crimes committed by US service members and intelligence professionals during the war in Afghanistan, he said that this was an “utterly unfounded, unjustifiable investigation”. He warned that countries or companies that assist in an ICC investigation of Americans will face US sanctions.

He also singled out America’s differences with the European Union about the legitimacy of the court, describing the EU as a place where the “global governance dogma is strong”.

“This administration will fight back to protect American constitutionalism, our sovereignty, and our citizens. As always, in every decision we make, we will put the interests of the American people first.”