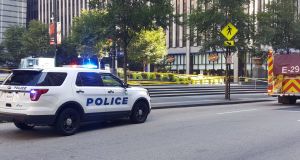 Cincinnati Police responds to shooting inside a bank in downtown, in this social media photo released in Cincinnati, Ohio, U.S., September 6, 2018. Photograph: Reuters

A gunman opened fire inside a bank in downtown Cincinnati on Thursday morning, killing at least three people and wounding others before being shot and killed by police, authorities said.

The shooter began firing inside a loading dock at the Fifth Third Bank near Fountain Square, police said, before entering the lobby where he exchanged fire with law enforcement.

“He was actively shooting innocent victims, it appears, and our officers were able to kill him and stop the threat very quickly,” Cincinnati mayor John Cranley told a news conference.

The city’s police chief, Eliot Isaac, said he could not confirm local media reports that the gunman was a disgruntled employee of the bank, and said he had no information that the victims were targeted. No police officers were hurt, Mr Isaac said.

Witnesses said more than a dozen shots were fired.

Ebony Ginyard, who works at a Dunkin’ Donuts in Fountain Square, said she and other workers and customers dropped to the floor when the shooting started. She said the gunman was so close that she could smell the gunpowder as he fired.

“All he had to is look over the counter at us and we would have been shot,” Ms Ginyard told reporters.

One onlooker, Leonard Cain, told a newspaper he had been about to enter the bank when someone warned him about the shooting. Mr Cain said he then saw a woman also walking into the bank, and that people tried to get her attention, but she was wearing headphones and did not hear them.

“She walked in the door and he shot her,” Mr Cain told The Cincinnati Enquirer, adding that he heard up to 15 shots fired.

The Enquirer said some customers were hiding inside a bathroom at the bank, and that one gunshot victim was found inside a nearby ice cream shop.

Another witness, Michael Richardson, who works in the Fifth Third Bank building, told the newspaper he was outside smoking a cigarette when he heard gunshots.

“I looked behind me and saw the guy – he shot and then he shot again. After that I started running,” he told the Enquirer.

Mr Isaac told reporters the gunman’s weapon was recovered, but did not say what type of firearm he used.

The police chief said he could not say whether the gunman shot himself in addition to being shot by gunfire from “at least three or four” police officers.

A spokeswoman for the University of Cincinnati Medical Center said three men and one woman were treated there for gunshot wounds. Two of them died, one is in critical condition, and one was in serious condition, the spokeswoman said.

The area around the bank was closed to pedestrians after the shooting. Police said people inside the 30-story Fifth Third Centre skyscraper were being held in place but would be able to leave the building soon.

“This is not normal, and it shouldn’t be viewed as normal,” the mayor told reporters, adding that the United States is the only industrialized nation with frequent active shooting incidents. “We as a country have to deal with it,” Cranley added.

City councilman P.G. Sittenfeld said it was a sick and tragic way to begin the day. “The scourge of gun violence leaves only loss,” Sittenfeld wrote on Twitter. – Reuters